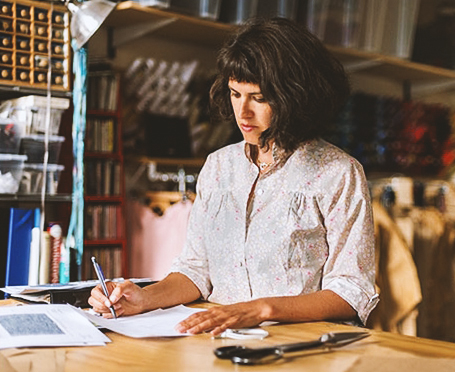 An eclectic collection of cards, photographs and assorted bits of ephemera are stuck to the walls, inspiration for the next season and recognition for work that’s already been done. On the floor, rolls of fabric bump up against shelving units piled high with samples. An intern from Kwantlen (the designers alma mater) sits at a sewing machine in the corner and at the center of the room, a large wooden table is the room’s only uncluttered space.

The colourful, cozy atmosphere of Allison Smith’s studio is reflected in the clothes she designs. Focused on women who spend more time running around town than slipping into evening gowns, she creates pieces for everyday life.

Having started out in the Fashion Design & Technology program at Kwantlen Polytechnic University, Smith moved to Montreal to pay her dues in the city’s garment industry before returning to Vancouver to pursue her own line. In 1998, she quit her part-time job and officially launched Allison Wonderland.

“So much has changed, and yet sometimes it seems like so little,” remarks Smith as she looks around the room. “I’ve been in this building almost the entire time and it’s been crazy to see the changes in Gastown.”

And that’s not all that has shifted as the years have passed. “My line has changed quite a bit as well, going from in the moment to a regular fashion cycle. It has grown up as I grow up.”

Smith is focused on fashion that offers comfort and fit, items that women can feel good in as they move throughout their day. Her inspiration can also often be traced back to the 70’s, her favourite decade.

“I don’t know, maybe it’s because I was born in that decade, it has a certain nostalgia for me. It’s kind of varied too. You have that bohemian, hippie beginning and then towards the end, you’ve got a more punk rock kind of look, so it kind of covers everything.”

“I noticed that the fabrics were getting a bit more interesting and that’s what had held me back before because I like colour and prints and there wasn’t much out there,” she notes. “Also, people were asking for it.” In the past couple seasons, Smith has been working hard to interject distinct differences into her Pillar and Allison Wonderland labels. “It’s still figuring itself out, but I’m excited about that because it gives me even more creative outlets.”

Smith designs her lines in Gastown and then sends the work to be manufactured in East Vancouver. As a low-volume designer, it’s possible to keep everything local and if offers her some other added advantages.

“It’s nice to know the people that are making the pieces – and I can be a little more disorganized because it’s just a quick bus ride, bike ride, car ride away to go check things out.”

This Friday, she will debut her Fall / Winter ’15 collections (both Pillar and Allison Wonderland) to the style savvy crowds at Vancouver Fashion Week. The shows run at 5:15pm and 5:30pm respectively within Queen Elizabeth Plaza at 649 Cambie Street.

“I had a baby two years ago and continued working through the whole time, but the lines got a bit smaller,” Smith notes. “So, for Spring 15 and really for Fall 15, I felt like it was back to where it was again and it seemed like the right time to remind people that I’m still here.” Smith’s little one made an appearance during a recent photo shoot.

For some designers, the days before Fashion Week are a blur, but Smith seems relaxed and ready.

“It was a fairly last minute decision, but I do a lot of work on the catalogues to get the looks right, so the styling is already figured out. The samples are made, I’ve got some music, I just need to figure the shoes out. On the day of the show, I’ll be freaking out, but right now, everything’s fine.”

And when the day is done, Smith intends to sit back and savour the moment. “I’ll probably celebrate with a glass of sparkling wine or two…or five.”

For more on Allison Wonderland, visit her site here, follow her on Instagram or find her on Facebook. You can also check out her runway shows during Vancouver Fashion Week.