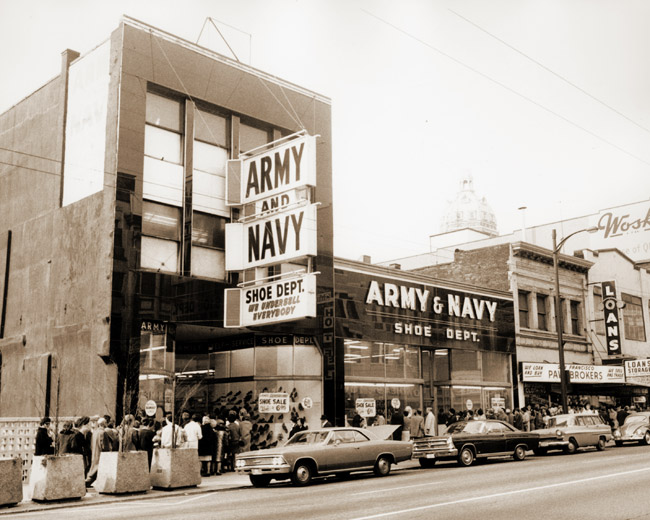 The first store was opened in 1919 on West Hastings Street by Samuel Joseph Cohen, a Jewish Canadian. The store bought and sold stock from liquidation, bankrupt and damaged stores as well as army surplus. Their business model has always been to keep prices low while regularly changing up much of the stock. Everybody loves a bargain.

The Depression of the 1930s was the catalyst that allowed Army and Navy to buy large amounts of goods from bankrupt manufacturers and department stores and pass on the savings to its cash strapped customers. Army & Navy ran a mail-order catalogue business from 1925-1986, making it one of the longest-running Canadian department store catalogues. Dubbed “The Bargain Book of a Nation.” The spring-and-summer catalogue of 1936 stated:

“We are very happy to know that by offering better merchandise at Canada’s lowest prices we will, to some extent, help the thousands of people who must ‘stretch’ their dollars this fall and winter as never before — this is the first Mail-order house in the history of the Mail-order business to offer its customers the advantages in ‘price’ and ‘quality’ made possible by the purchase of hundreds of Bankrupt stocks, Distress merchandise and factory surpluses …”

Expansion continued from 1920 – 1969 with further stores being opened in Regina, Edmonton, Moose Jaw and New Westminster. The Cohen’s went on to open a second Edmonton store in 1955. With the death of Samuel Cohen in 1966, Garth C. Kennedy became president of the company, with Jack D. Cohen as vice-president. In 1998, CEO Garth Kennedy died and the company was turned over to Sam Cohen’s granddaughter, Jacqui Cohen. Army & Navy is a Gastown icon. The West Cordova entrance is found within the historic Dunn-Miller Block, built in 1888.

“The Dunn-Miller Block is noteworthy for the imposing 180 foot (55 m) long facade of this building, which takes up almost half a block and was considered to be at the time of construction in 1888, ‘the largest, most pretentious and important’ structure in the city. As one of the first buildings to be constructed of permanent materials after the great fire of 1886, the Dunn-Miller Block was seen as a sign of renewed prosperity and confidence in the city’s future. Since 1948, it has been part of the Army and Navy discount department store chain”. Source: Historicplaces.ca