Raise a Glass on Christmas Day in Gastown – Gastown 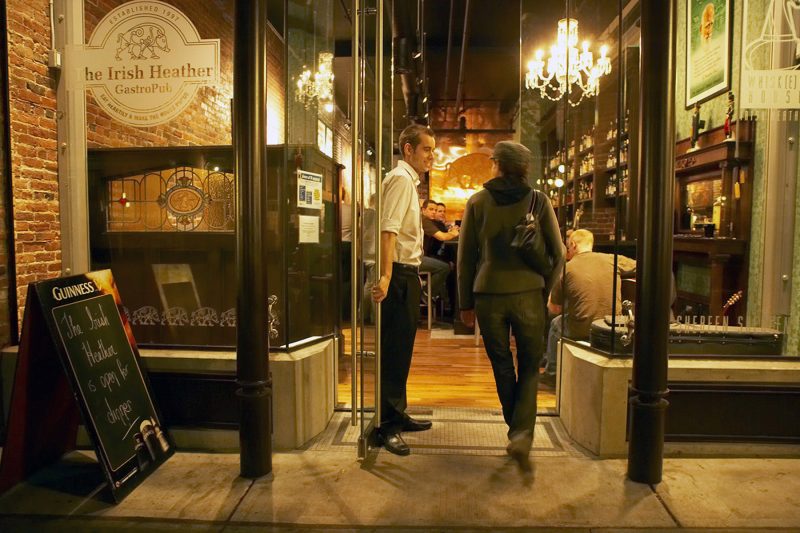 The Irish Heather has been a fixture on Christmas Day for several years, drawing a healthy number of British and Irish expats living in the city. It makes for a lively environment with plenty of good food, great conversation and more than a few rounds of cheers. Even those in transit, say from North Van to Kits or Richmond to Deep Cove, have been known to stop by for a sneaky pint and a pie!

Owner, Sean Heather, opened the Heather in 1997 and it remains the only authentic Irish pub run by Irish people in Vancouver. Proudly pouring proper pints of Guinness, you’ll find comfort food favourites like bangers & mash, alongside the largest selection of single malt, bourbon, rye, scotch and Irish whiskey in the city. So, if you’re in need of tidbit and a tipple on December 25th, make your way here!

The (poor man’s) Black Velvet
The genuine article is made with champagne, but this rendition is comprised of equal parts Guinness and cider, with the Guinness floating on top. It’s quite the sight to see!

The Wiseman
Have a cocktail and support a cause. This modern twist on an Old Fashioned supports the city, with $1 from each one benefitting a Vancouver-based charity. Down the street in the historic Dominion Grand Hotel (est. 1899), The Lamplighter will be hosting ‘The Orphan’s Christmas’ and they’re looking for volunteers.

If you’re staying in town during Christmas and want to lend a hand, the team needs help assembling and distributing meals to individuals on the Downtown East Side. At the end of the day, everyone involved will gather together at The Lamplighter for a festive turkey dinner prepared by Chef Alvin Pillay. It promises to be a feel-good event that is sure to deliver its fair share of Christmas cheer. All you have to do to get involved is RSVP to dh@donnellygroup.ca.