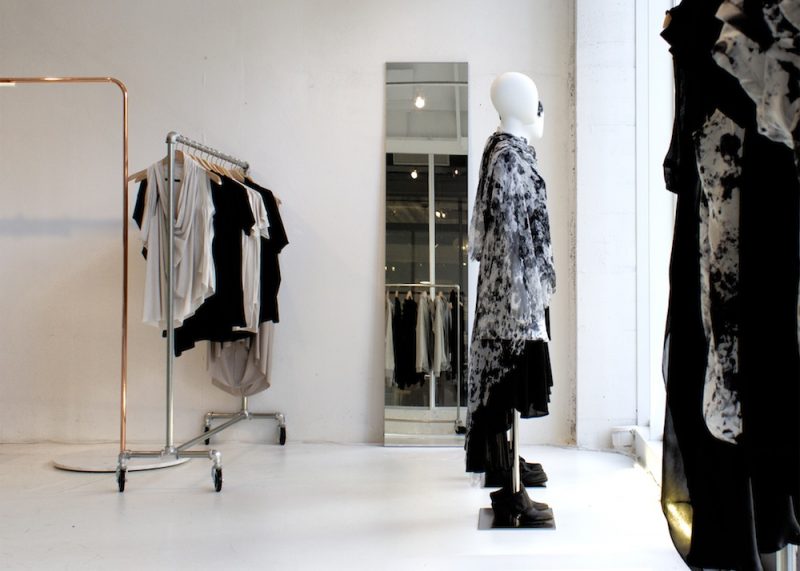 What led you to the fashion industry?

I always had an interest in fashion, but never really thought I’d be happy being part of the industry.  I started making clothing while I was studying art at college and realized that I enjoyed the process more than any of the other mediums I was working with. It evolved pretty organically from there and in the end, the industry of fashion has been a lot more welcoming than I expected.  A lot of my closest friends I’ve met through fashion.

As a self-taught designer, how did you develop your skills?

At the beginning especially, I was very interested in the way things were made.  I’d look at clothes, designer and vintage, and try to understand how and why they were assembled the way they were.  I developed a very logical approach to design.  It started by watching my Grandmother draft patterns on her dining room table and as I continued, I kept learning from the people I was working with.  There have been many times that I wish I had formal training, or the benefit of an internship, but being self-taught means I don’t just know things, I understand them. That’s invaluable.

How did complexgeometries form? What inspired the creative vision?

I think the starting point was really the name. I had been making clothes for a while, but I knew I didn’t want to put my name on the project. I was watching a documentary about Buckminster Fuller, and he was talking about complex geometry and, although there was nothing geodesic about what I was making, his ideas about using the purest shapes in repetition resonated with me. That kind of distilled geometry is probably what the brand is best known for.  The shapes might be simple, but the way it all works together is misleadingly complex. A garment that might look like a rigid rectangle becomes a mass of soft pleats when it’s on a body. The complexity is in the relationships. How would you describe the complexgeometries wearer?

That’s always a difficult question to answer. As a designer, my goal is to make something universal, which is why most of the collection is unisex, and it works on a lot of different body types.  So I’m happy to say that our customers are really diverse.  But I think the one thing that everyone has in common is equal appreciation for creativity and comfort.

Many of your pieces are designed to be unisex and multi-wearable. Can you explain the concept behind this choice? How does this translate into the jewellery and footwear collection?

The decision to make things unisex stems from a desire to make clothing that is universal. The multi-wearable styles are a result of an opposite motivation – to create clothing that is always personal to the wearer. So, while things could be worn by anyone, the way someone chooses to wear a piece is exclusively theirs.  In many ways, style and fashion are opposite. Fashion is about rallying many people to adopt the same look, while style is about defining a look that is personal. Both community and individuality are important to me, so I try to do something that balances both.

As far as the way that translates into the jewelry and footwear collections, we try to do the same thing.  Most of the footwear styles, done in collaboration with LDTuttle, have been offered in unisex sizing, regardless of whether the style could be perceived as masculine or feminine. It’s all in the balance.

In a previous interview, you’ve spoken about collaboration and interaction as two important components to your work. Do you have any collaborative projects in the works?

Absolutely. But I don’t like to talk too much about collaborations until they’re done.  We might start with one thing in mind, but finish with something completely different…

One collaboration that will be launching very soon is with Vancouver based knitwear company, Granted.  We’ve designed some hand knit sweaters and accessories that compliment the West Coast lifestyle in a complexgeometries way. They’ll be arriving at the shop in early October. When looking to open your first boutique, what drew you to Gastown?

We had been considering opening our first boutique for a while, but had been debating the location for just as long.  As chance would have it, I had a stopover in Vancouver while on my way to Japan and decided to take a few days to catch up with friends and see the city. I was really impressed. The city seemed to offer a little of everything. And Gastown had the right balance of all the things we were looking for in a retail neighborhood. It has a small and vibrant community of people interested in design of all kinds, as well as an influx of international visitors.  Luxury and lifestyle both have a place. And even the architecture reflects the neighborhood’s position between history and modernity.  It’s hard to find that balance elsewhere.