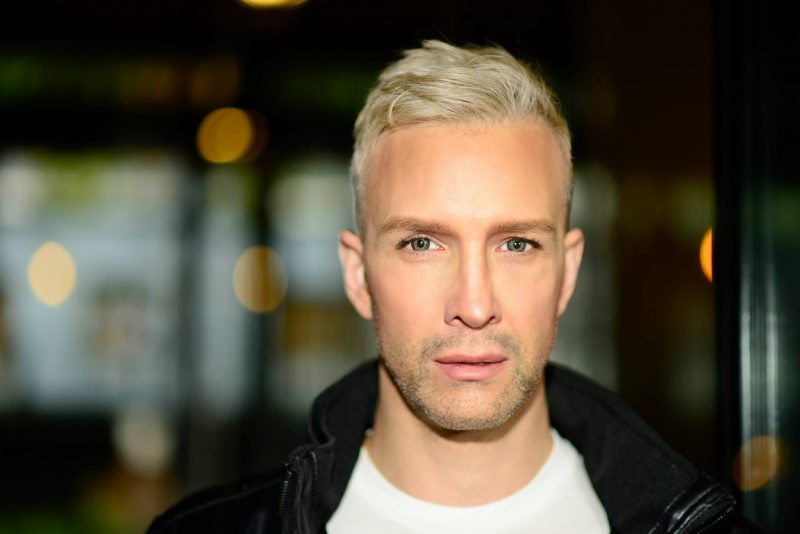 Matlo got his start at The Helen Lefeaux School of fashion design in Gastown. In 1998, after completing his studies, he was selected to represent Canada in a competition that sought to unearth the worlds’ most promising young designers. The attention earned him a great deal of press, but no job offers. Undeterred, he continued to develop his craft, and in 2004, debuted the first Jason Matlo collection.

In the decade since, he’s created countless collections, each centered on the characteristic Matlo fit. In October, he sent his tenth anniversary collection down the runway, catching only glimpses of it from backstage where he prepped and primped each model before sending her through the curtain. “This was the most resolved I have ever felt creatively because I really designed the collection the way I wanted without considering buyers, press or industry critique,” explains Matlo. It felt very authentic and there was a lot of black!”

Inspiration is never a problem for Matlo, a self-professed student of life.

“We have so many brain storming sessions each season where we discuss design, movies, music, art, social media and what we feel is relevant and current,” he notes. “I’ve always been an observer, so I never run short on ideas.”

Wen-Chee Liu works behind the scenes while model, Yana (from Next Models) poses. Photo by Matthew Burditt.

In a city that generally favours comfort over couture, Matlo creates collections that find a balance between design and commerce.

“Most people are fashion followers not innovators so we keep that in mind every time we propose a design idea,” he explains. “If you want to be successful in the fashion market you have to understand your brand DNA, and really know what the customer wants.”

Matlo’s private clients tend to be bolder, allowing him to work outside the mould. And it was one of those relationships that sparked his bridal collection.

The Bridge to Bridal

“My friend Gabrielle Miller (from TV’s, Corner Gas) asked me to design a gown for her wedding,” Matlo recalls. “After that, people began coming to me to design for their wedding.”

Matlo’s Chef d’Atelier, Wen-chee Liu, was already a fan of bridal design and persuaded him to consider a collection. He resisted at first, but soon saw the freedom and experimentation that came along with it.

“When you’re designing a collection, the process is very linear and focused – one inspiration, one customer profile, a cohesive collection of silhouettes, colors and fabrics for each season,” he explains. “When you design a bridal collection, you are not designing for one woman and one type of customer, but rather a broad spectrum of women and tastes.”

In 2014, Matlo’s bridal collection featured both voluminous and close-fitting designs. This year, the focus will be on detailed handwork and unique surfaces.

“I have been studying traditional couture books and I am completely seduced by bespoke fashion,” he exclaims, before moving to the topic of colour. “Ecru and white standards are still the most sought after, but I’m feeling nude, dove grey, gold and silver for 2015 because I’m personally drawn to those shades.”

The collection allows brides to explore textures, fabrics and shapes, before making a decision on whether to go completely custom. While some arrive with mood boards full of images and ideas, others look to Matlo for inspiration.

From First Sketch to Finished Gown

“I typically start with a sketch of the desired dress, choosing fabric, taking measurements and then drafting a pattern,” he explains. “From there, I create a toile, or prototype of the dress in an inexpensive fabric so that the client can see the dress on their body and make sure everything is working in terms of design.”

With as many as five fittings before he ever cuts the fabric, Matlo brides are part of an involved and beautiful process where their thoughts and wishes constantly contribute to the end design. And while he prefers to start several months out, he admits he’s turned a few gowns out in as little as two weeks. Matlo used his working design space as the backdrop for the 2014 Bridal shoot. Photo by Matthew Burditt.

Recently, the team at Jason Matlo expanded again, releasing a collection of bridesmaid and special occasion dresses. Priced between $300 and $400, they are perfect for the wedding party and are starting to gain attention from grads.

“We wanted to offer an added service for our brides to round out the look and experience of their special day.”

Matlo draws some of the inspiration for growing business from the neighbourhood surrounding his atelier. Located in Gastown, he craves the diversity, motion, food and culture that the area has to offer. “There is an energy and pulse to Gastown that gives me the kind of rush that I get in NYC,” Matlo notes. “I have always been a person who wants to be where the action is – I am a city person and the beauty and grittiness of Gastown gives me what I need to feel stimulated.”

The atelier itself is bright and open, bringing together work and casual spaces where Matlo can design and create.

“I knew within seconds of walking into it that it was the perfect spot for my atelier,” he recalls. “I felt alive and energized when I walked into it three years ago, and I still feel exactly the same way.”

While downtown Vancouver is within walking distance, Matlo often stays close to his home base when it comes to dining. A big fan of the intimate atmosphere at Notturno and cocktails at Bambudda, Matlo is quick to recognize the latest addition to the hood.