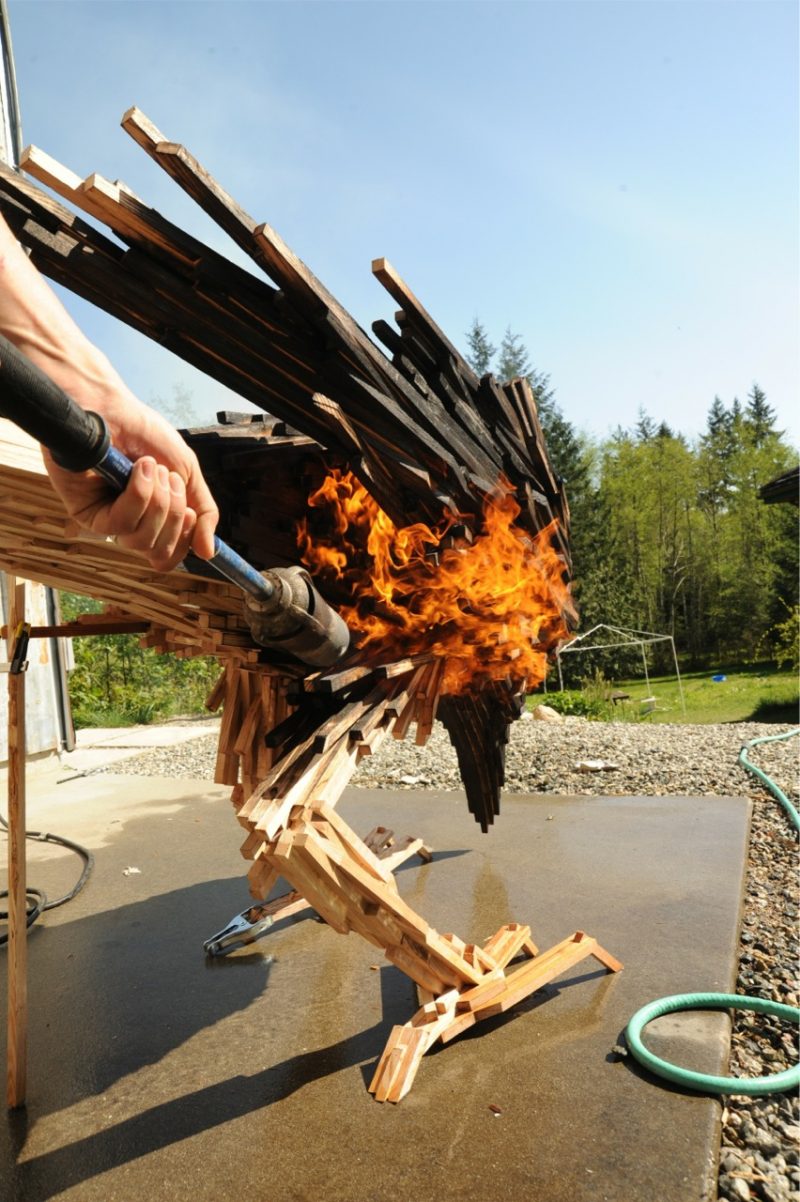 Tell us about the piece. Does it have a name and what is it made of?

“Sense of Silence” is a collaborative sculpture of a Covus Corax (Raven) looking down into a hole from which light emanates. It’s made of reclaimed red oak flooring. The sculpture was made in wood, and systematically set on fire and then steel brushed to create the black surface. This ancient technique is used as a treatment to seal and protect wood finish rather than using stain. Nicolas Meyer used it on one of his designs and introduced me to the method – which in turn sparked the collaboration. What was the inspiration behind it?

I’ve always been very interested in corvids. As an orthithologist from the age of 12, my entry into art college was a drawing of an osprey. I studied fine arts and graphic design and became more interested in birds, particularly corvids, when I moved from London, England to the West Coast. I’m curious about how they connect with each other and their own environment. They have a certain type of intelligence that is separate from humans. I like that these birds give without expecting anything in return. Corvids don’t have a strong agenda, but rather a strong collective and cooperative energy, which I admire.

How long did it take to complete?

Thirty-three years…kidding! This question always humors me. Conceptual drawings and clay marquette went on for about a week, and life size drawings of three perspectives were a few days. It took about three days to prepare the floorboards, around 12 days to sculpt the final piece with fire/water brushing work taking an additional four days… you do the math.

What is involved in getting it installed in the Fluevog store?

It’s very simple. The artwork consists of two pieces: the sculpture and base. It travels in style in the back of Nico’s Mercedes van, and then is suspended from the ceiling. We know how it should move, so we move it around together. Despite being hollow, it weighs about 350lbs and has no internal supporting structure, simply standing on its own two wooden legs with regular glue. You are also the owner of Kameleon Creative in Gastown. How long have you been in the neighbourhood?

Gastown has been my neighbourhood for 23 years and I’ve always liked it.

What are some of your favorite places in Gastown? Sense of Silence is on display now until November 2nd at Fluevog‘s flagship store at 65 Water Street. If you’d like to view more of Lee’s work, visit Leerobertsart.com.