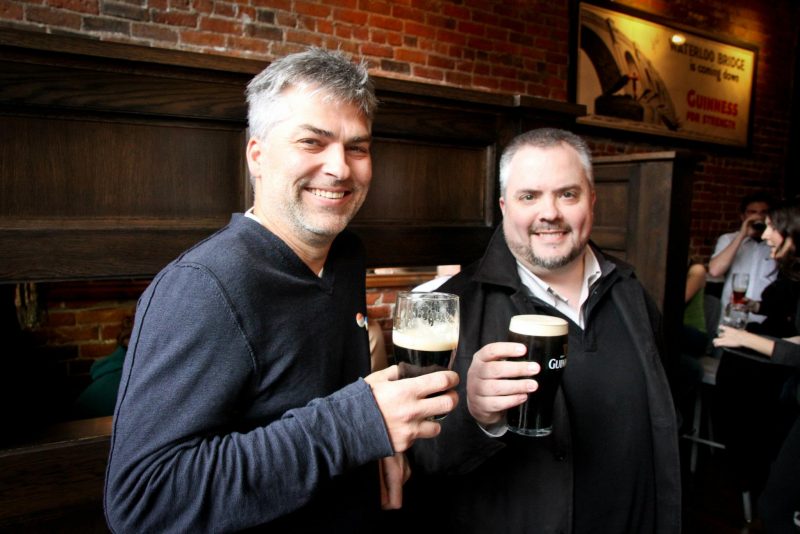 Heather’s restaurants are diverse, offering everything from mid-day fare to an evening nightcap. Thanks to some sound planning that has kept the properties within a short walk of each other, he’s able to manage the lot without leaving the area. It’s this commitment to Gastown that has earned Heather a few nicknames, including ‘Godfather’. As one of first restaurateurs to begin reshaping the neighbourhood’s culinary scene, it’s understandable why others look to him for sound advice.

“I didn’t come here as a crusader, I mean I’ve lasted, while others have gone by the wayside so there’s something in that, but there was no grand plan,” notes Heather. “For me, everything happened organically – if the opportunity was there and the money was there, I did it.”

Over the past decade, Gastown has established it’s vibrant culinary scene, attracting some of the city’s best chefs and most inspired dishes. There’s certainly a healthy dose of competition among them, but the sense of community, verging on family, is even stronger.

“We’re all rooting for each other,” Heather explains. “If one of my patrons asks me where to go for dinner the next night, I always try to keep the business in Gastown.”

Heather notes that the people who set up shop in Gastown are a compassionate group who want to make a difference. In his view, the kind of mindset that makes you want to give back to the community also makes you ideal for the restaurant business.

Q: WHAT DOES THE RETURN OF FAMILY DINING TO THE IRISH HEATHER MEAN TO YOU?

For several years, Heather was more than a local business owner. He was also a resident. Living above the pub made his commute to work a quick trip down the stairs, but today, he’s traded that convenience for a little bit of separation from the business. Heather’s wife, Erin, is also heavily involved in the restaurants, so it takes some teamwork to make sure nothing falls through the cracks.

“Between the two of us, we’re usually high-fiving and tag-teaming the day,” explains Heather. “We try to build family time around everyday things that have to happen, like setting the table or doing the dishes.”

It’s that focus on quality time with the kids, often taking place around a meal, which has him pleased about the return of family dining to the Irish Heather. The restaurant is one of the first liquor primary venues to receive approval for minors to dine with their families, and Heather is sure that his current patrons will welcome them.

“It’s exciting because I’ve never viewed The Heather as a rough and tumble, beer-swilling kind of place,” notes Heather. “It was always geared towards people going for a walk around Gastown, pushing prams and then coming in and have a beer while the kids enjoy some chips.”

The Irish Heather, which opened in 1997, was a family-friendly destination for it’s first decade, but a move across the street to a new location and a subsequent change to the liquor license ended that run. Forced to turn away countless disappointed customers over the past seven years, Heather is ready to restore the family environment that he’d find back home in almost every Irish pub.

To meet the tastes of his younger visitors, Heather is introducing some wholesome favourites, including pigs in a blanket and toad in a hole, dishes that offer a combination of fun and healthy ingredients. Kids under 10 will eat on the house from 11:30am to 7pm and there are plans to bring back the popular Sunday lunches.

As customers return to The Irish Heather for family meals, the establishment is once again in the running for this year’s Georgia Straight Best of Vancouver survey. The gastropub has already won a decade’s worth of honours, something that Heather truly appreciates.

“It’s not ‘best Irish pub’ that we’re being recognized for, it’s best pub, which is a distinction that I’m proud of,” Heather notes. “You’d hope that as the only Irish owned pub in the city, we’d have a shot at the former, but to win best pub and best pub food from readers who vote with their wallets is an honour.”

Q: WHAT HAS BEEN YOUR PROUDEST MOMENT AS A RESTAURATEUR?

As Heather nears twenty years in Gastown, he’s got a lot to be proud of. He was inducted into the BC Restaurant Hall of Fame last year and has begun to embrace public speaking engagements, despite a fear of standing up in front of crowds. His next appearance will take him to Sacramento on the topic of wine & cheese bars and the success of Salt Tasting Room.

In it’s first year of business, Salt did a clean sweep of every single award available, both locally and nationally. It was a resounding stamp of approval for Heather, who found most people were confused by the concept of a chef-less restaurant that didn’t actually cook anything.

“People think it was a fluke, but I sat down with my business partner Scott and worked out what we called the anti-restaurant,” Heather explained. “We mapped out the entire experience from start to finish and we knocked it out of the park.”

Among the accolades for Salt was the Cadillac Fairview Achievement in Retail Concepts Award, which carried a $50,000 prize. The company flew Heather to Toronto for the gala event, where he rubbed elbows with the who’s who of the restaurant business. Heather was humble about his chances. And then they called his name. With a little liquid courage on board, he headed to the stage.

“I told them I was delighted to have won because I couldn’t afford the suit I had bought for the evening and now I knew I was going to get to keep it,” Heather says with a smile. “My wife just shook her head.”

Q: WHAT ARE YOU GOING TO DO WITH ALL THOSE AWARDS?

Recently, staff convinced Heather that the armloads of awards the establishments had earned should be on display, so he went out and bought picture frames to house them. But being the modest Irishman that he is, they may never make it up on the wall.

Heather admits the accolades are nice, but what he really wants to see is satisfied smiles as he walks through his restaurants.

“I always say to my guys, you’re not just feeding people,” notes Heather. “You want them to push that plate back at the end and go, wow, that was awesome.”