Gastown Then and Now: The Dominion Hotel and The Lamplighter Pub – Gastown 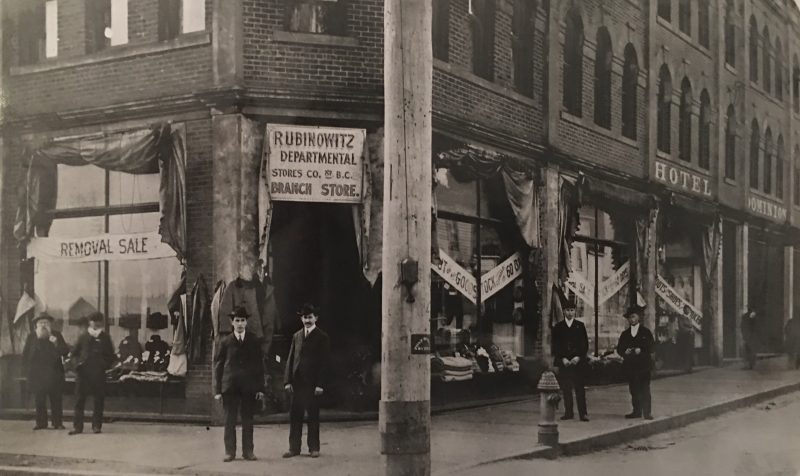 The Lamplighter Pub (located at 92 Water St) is quite possibly one of the most iconic drinking establishments in Gastown, if not, Vancouver. Established in 1925 (and having received Vancouver’s first pub license), this well loved haunt is steeped in history. The ghosts of the past perhaps linger, to vicariously lean in on the good conversation, merriment and laughter that occurs nightly.

The first commercial building on the site was a bar. Aptly named: “The Hole-In-The-Wall Saloon”, it was the vision of local pioneer, Joseph Simmons. It was at The Hole In The Wall that the city’s first and only lamplighter, John Clough would spend a considerable amount of his time, relaxing. Today, you’ll find a cocktail lounge hideaway within in The Lamplighter Pub (named after Mr. Clough), suitably called The Clough Club. The Dominion Hotel was one of Gastown’s earliest lodging houses, originally located above a commercial ground floor space. Like others in the area, the Hotel largely catered to seasonal workers in resource trades such as fishing and logging, allowing for both short and long term stays. Many of the hotels served a dual function: thriving commercial services at street level with lodging rooms on the upper floors. This mixed use created a lively atmosphere in the growing neighbourhood. Originating between 1900 and 1901, the Dominion had a busy department store operating on the ground floor called Rubinowitz’s Cheapside Department Store and was owned by a merchant named Swain Sherdahl. The hotel was interchangeably referred to as the Sherdahl Block. Its success marked the area’s early prominence as a commercial centre on the Canadian West Coast. The century-long use of the name “Dominion” also solidified Vancouver’s strong economic position as the last stop of the Canadian Pacific Railway.