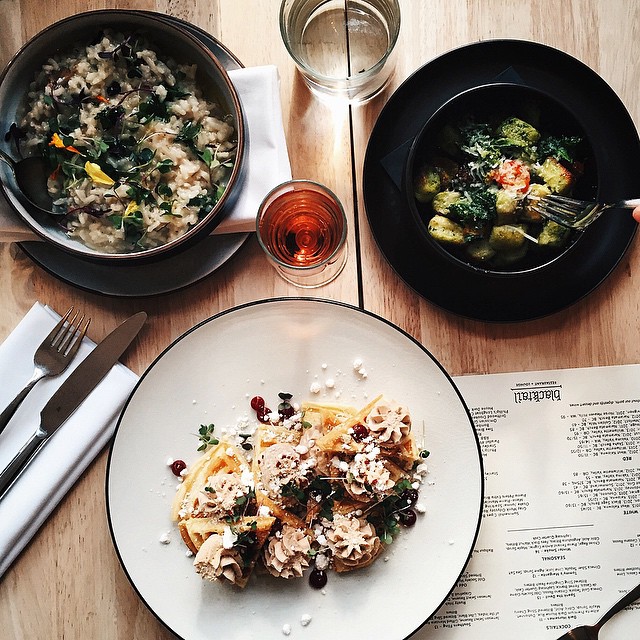 For a leisurely weekend brunch, the options are plentiful. A few dining mainstays have introduced a new brunch service. L’Abattoir’s new brunch menu garnered rave reviews. Along with delicious plates of French-inspired comforts, try their in-house pastries, followed with a glass of House Aperol Spritz.

After satisfying your appetite, take a look at the new changes along Cordova Street.  Ego Closet has given their digs a modern makeover to display edgy Korean fashion. Alfie Italia is now stocking Italian menswear, and fashion-forward designs by emerging Canadian talent. Drop by, chat with Grace and sip on a cup of coffee while receiving styling tips.

Tucked inside Le Magasin, interior designer Pierre Derreumaux showcases Norwegian décor and local art at his boutique, Espace D. If you’re lucky, you might catch a glimpse of Lucy, his adorable pup who also doubles up as the official shop greeter. In case you haven’t heard, the Steam Clock has returned in all its glory. A few steps away, LUMAS retails reasonably-priced limited editions from over 160 internationally renown artists. Also on Water Street, Indochino relocated its showroom, which offers gents a place to view and select fabrics, get properly measured and create a made-to-measure suit without the worry of online buyers remorse.

Kit & Ace’s stunning Gastown shop is worthy of a double take. The concept studio & store is where it all began for the growing company. Locals can pop in to meet their in-house design team, shop luxurious machine-washable cashmere, and receive complimentary tailoring and monogramming. In the after hours, you might spot familiar creatives dining inside the shop during their supper club events.

When it’s time for a lunchtime nosh, check out Shirakawa in Gaoler’s Mews Courtyard for Japanese teppanyaki and affordable lunch specials. Over at Cordova Street, satiate your taco cravings at Tacofino’s ‘Burrito Bar’ takeout counter. Enter through Blood Alley after 5pm to taste a different batch of tacos & burritos at their ‘Taco Bar’ flagship restaurant.

For expert beautification, head to Brush Salon to have your tresses styled, cut or coloured by leading specialists – and if you feel the need to selfie, snap a pic in front of their cheeky neon signage. For those who live in small urban spaces, CondoBed (on Carrall Street) offers a sleek storage bed furniture solutions. For live entertainment, end the night inside Alexander Gastown. The new bar-meets-venue partners with Timbre Concerts to host live shows headlined by emerging international acts. And if you have a late-night grilled cheese craving, Hi-Five is open until 2am and rolls out five different sourdough sandwiches, along to-go soups and mac & cheese by Six Acres.

If you’d like to read more on Gastown’s new additions, check out our recent posts:

Brush Salon Opens with a Blow Out