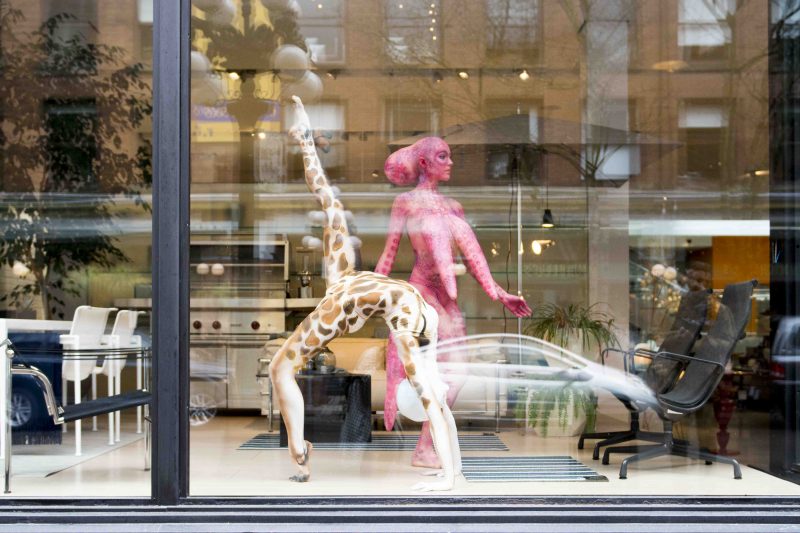 Those walking along Water Street may have been surprised to see a giraffe and an octopus standing amongst the furnishings at Inform Interiors this week. It was all part of an elaborate publicity stunt arranged by Science World as they promote the final weeks of their Animal Inside Out exhibition.

It all started a few weeks back when the team behind the exhibit reached out to Jennine Cook, Industry Liaison and Co-Director at the John Casablancas Institute about creating living works of animal art. The concept sounded interesting and she quickly reached out to two alumni who were accomplished in special effect and fantasy makeup. Jenika Wallis graduated in July and has been working on bridal shoots and short films.

“I love it all, beauty because I like to enhance someone’s natural looks, but also fantasy – because I love the artistic part of it.” Wallis explained.

As a freelancer, she regular partners with Brittany Horne, so the pair decided to work together on the octopus.

On team giraffe, Samantha St. John graduated in December and has been working on independent films. Set to start soon on a vampire pic, she was thrilled to get the call from JCI.

“It’s great to have somebody help you find work. Jennine regularly sends out opportunities.”

“We were doing a photoshoot and she saw my work. She told me about this and now we’re here,” she said. “This is major. It’s really confidence building.”

On Thursday morning, the four artists and two models met up early at JCI to begin the transformation. It started with a full paint down for each model, one in white and the other in pink. The octopus got four prosthetics, created with latex and pillow stuffing, and a cap to create the body. For the giraffe, it started with spots and a mane.

Five hours later and some airbrushing later, they were ready to hit the street. The models were carefully wrapped in raincoats and sweaters and everyone headed to the Waterfront Skytrain with a CBC camera in tow. For two hours they popped up at locations around Vancouver, including Telus Garden, Nordstrom and Pacific Center posing for pictures and interacting with the public.

Then, it was back on the train for a very special stop in Gastown. The group arrived at Inform Interiors late in the day for a photoshoot in one of the neighbourhood’s most stunning settings. As the staff looked on, they posed on the staircase and in the window before heading back to JCI. The day was long, but worthwhile for all involved. Models Teghan Fedor, who did dozens of backbends as the giraffe, and Natalie Kuntz, who put movement into her poses to give the sense of an octopus in water, where amazing and the perfect canvases for Jenika, Brittany, Samantha and Tiera.

“Without JCI, we wouldn’t have come this far, this fast,” Jenika shared.

For Brittany, it’s the family environment. “Jennine is a lifesaver. She coaches us through any work we get. I just love her so much.”

Samantha is hoping to one day join the faculty as a teacher, either in airbrush or special effects.

And for Tiera, it’s just the beginning. “My biggest thing is that if people are smiling, I’m doing something good and today, seeing that was the biggest best thing ever.”