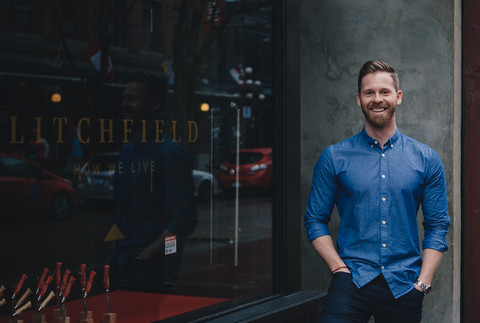 Interview by Luiz Valdizon, When They Find Us

Jonathon Litchfield, the oldest of five siblings, spent his childhood and a portion of his adolescence growing up in Japan with his family. Aesthetic sensibility feels more like an heirloom for the Litchfield’s, passed down from generation to generation. It has undeniably been one of the most prominent factors leading up to the opening of Jonathan’s shop, Litchfield. Family is completely engrained in every aspect of the business’ philosophy to its interiors, which Jonathon says reminds him of a home his grandfather built around the time he was born. How they live, they being the Litchfield’s, and how he lives are consequently interwoven. Our interview with Jonathon helped us understand the value of family, well-crafted items and a well-kept environment.

How did the idea for Lichfield manifest itself?

About a year ago, a couple of close friends of mine were in Nicaragua and were engaging in “New Year’s resolutions” type of conversations deciding what we needed to do, and we were kind of bouncing ideas back and forth off of each other. One of the ideas that came up was this concept; me putting together a retail store to offer the way that my family lives, which I had never really given much thought to in terms of an aesthetic. As we talked it through, my friends kind of helped me see that although it’s not super different from the way everyone else lives, there is a difference. There is a very strong and consistent aesthetic. We pull interesting products from around the world into our lives, and that’s what we live with. My friends kind of threw down the gauntlet and offered it up as a challenge. Together, we set some goals and of course, I talked about it with my family. I thought a lot about it until it just kind of came together. So, I guess if I had to name a single moment, it would have to be New Year’s Day 2013 that it all kind of came together.

Could you explain the “How We Live” concept?

The idea behind the store, like I mentioned, is inspired by the way my family lives. It is more of a philosophy than a collection of things. I was raised in a home that was always very well kept. It was organized. It was clean. It was beautiful. Whether we were in Canada or Japan, as you can imagine the spaces were very different, the feeling was always the same. As I spoke with my mom later on, it was a very conscious decision to create an atmosphere where we, as a family and the kids, felt like it was calm, clean, secure and loving and that idea is what’s most important to me. When I had the opportunity to bring other things into the store, it was that idea that I wanted other people to be able to recreate for themselves. The idea comes not from the things themselves, but the way that those things are used. So, when you need to use a pen, a knife or a pencil, if you have something that’s been beautifully crafted, that there’s been thought put into and the collection of what you surround yourself with is an accumulation of things that are well crafted, beautifully made and well thought out, the overall feeling comes together and it is inspiring. It inspires you to feel peace, to feel creative, to live well and that’s what I’m hoping to do to bring together a collection of things that, over time, people can add to their own homes and have that feeling for themselves.

In what ways did your upbringing in Japan influence you?

Japan influenced who I have become today. I left Japan when I was fourteen. I was young enough that many things were seamlessly woven into my character, but old enough to be consciously aware of how it was impacting me and I could observe it almost from a third party standpoint. I was able to cultivate and reflect in a way that my younger siblings weren’t able to yet. The Japanese aesthetic, I don’t mean visual aesthetic, but the Japanese philosophy towards things, life and nature, and how they interact, I think has really become a part of how I feel about things as well.

What was your inspiration behind Litchfield’s interior?

I’m probably the worst person to talk to about planning a business and executing it because while it was planned, I went with what felt right. As I was developing the aesthetic for the interior of the store, once I found the space, which is a long very linear concrete space, it became very obvious to that it was my grandfather’s home. My grandfather built a house right around the time I was born with a lot of exposed concrete, beautiful hardwoods and grass cloth. It just seemed like a natural shell for the things that I sell. It’s reflective of our family and how we live. It’s one of the spaces in my life that I love the most. I worked with my mom on the design. She has an incredible design sense that I lean on more than anyone else’s. My brother built the shelves. I was lucky enough to tap into some resources that I had, to pull things together. The look of the store is definitely rooted in my grandfather’s house.

What’s role does intelligent design play in terms of items you stock? I try to exclusively bring in things that are intelligently designed. There are millions of products around the world, so if it were just a matter of stocking the shelves in terms of beautiful things, it would be a much easier task. If it were just stocking the shelves with things that are useful, again, not a difficult task. To mandate that everything in the store is as beautiful as it is useful is my goal. It’s easy to fill your life with things. Mediocrity is very easy. I don’t think intelligent design needs to be expensive or exclusive; I think there’s space in all our lives for intelligently designed products. I personally know that if something is financially a stretch for me, I’d rather do without it until I can get something that I love and will last. I would much rather do that than fill that hole in my life with a product that just gets me by for another 6 months. I think that elegantly designed things are better for the environment, better to be used, and better all around. It does take some digging, but I think it’s worth it.

What are some things about your neighborhood that you hold dear?

Honestly, you hear people talk about never leaving four blocks from where they live. You don’t really need to leave Gastown to find some of the best things in Vancouver. Gastown is home to the best food, the best cafés and some of the most interesting people. The thing that I’ve been the most struck by is how tight, how strong and how warm the community is. The people of Gastown are just incredible. The shop owners, the cafe owners, the people that live around here, everyone is incredible. It’s really neat. It’s an awesome vibe. I feel lucky to be a part of it.

The original interview has been edited for length. Read the full text here.