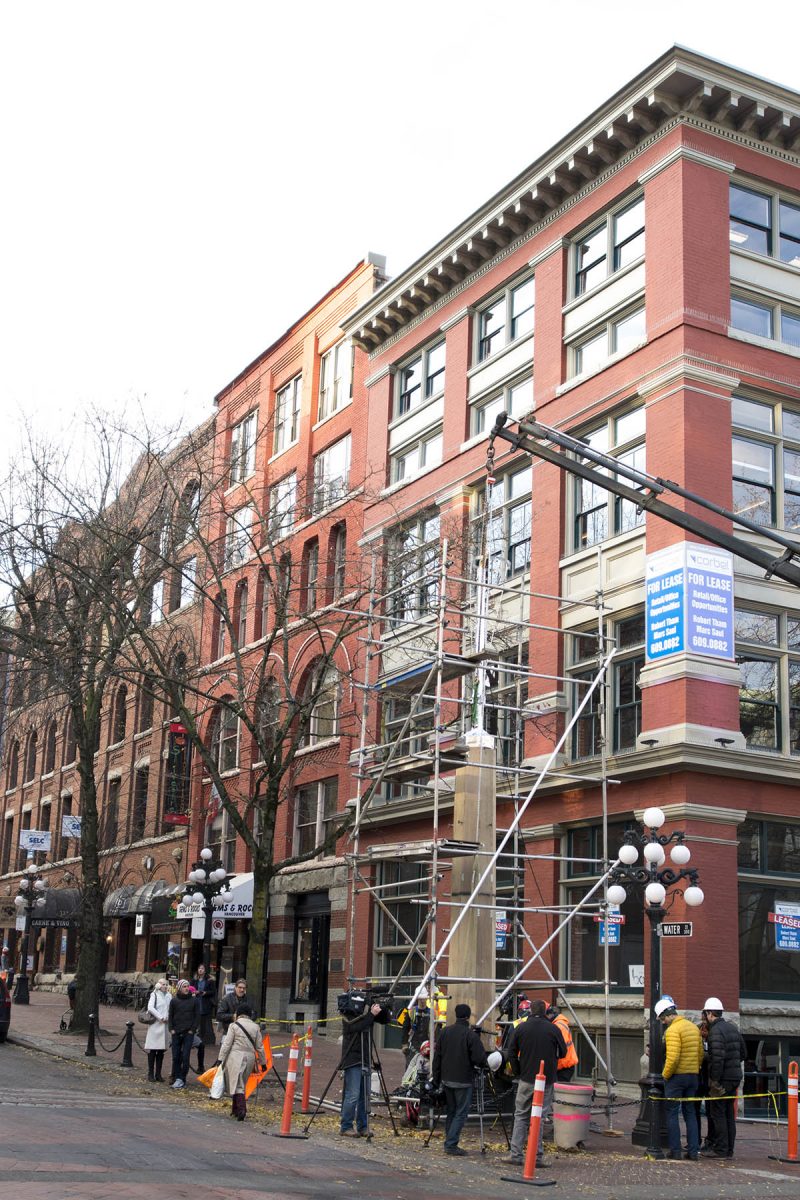 Visitors to Gastown this holiday season will be greeted by a 27’ reflective cylinder, titled ‘Make It Rain’, which has taken up a temporary home on the Steam Clock pedestal and will remain there until the iconic Steam Clock is scheduled to return.

The Steam Clock, a favourite with locals and visitors alike, was removed in October for much needed repairs, leaving many to take their selfies in front of a temporary wood cover. Faced with a very unique opportunity to re-purpose the space, the Gastown Business Improvement Society approached Dream the Combine about doing an art installation at the site.

Jennifer and Tom Carruthers, the founders of the Vancouver design studio, are behind several large-scale installations in the USA and were eager to make their mark in the city. Using the steam as the inspiration behind their design, they conceived an interactive piece that would reactivate the intersection.

Scaffolding surrounds the core of the art piece as the team works. Installation will be complete on Wednesday.

‘Make It Rain’ is a reflective tower that harnesses the steam from the vent and releases it through its skin to create a cloud of vapour near the summit. The material is soft and crinkled, taking on the scene around it and shifting as it’s touched. The tower will also sway slightly in the wind, bringing the installation to life as the lights of the street and the faces of visitors dance across its surface.

Dream the Combine had secured partial funding from the Gastown Business Improvement Society before launching a campaign on Kickstarter. In eight days, they were able to raise the $19,500 they needed to move forward.

“We are genuinely humbled by the public’s support of this project,” noted Tom Carruthers. “We were challenged to utilize the steam as an integral part of the artwork, as well as offer a commentary on Gastown’s role in the city. We are thankful to everyone on our team for making this project a reality.”

The project is the result of several talented specialists joining forces, including Clayton Binkley of ARUP Seattle and Elia Kirby of Great Northern Way Scene Shop (engineer and installer behind Janet Echelman’s TED Conference net sculpture), Shane Blackmon from BC Mechanical (the steam fitter currently working on the overhaul of the steam clock), Dan Elliott of Feathercraft (well known for inflatable kayaks that are enjoyed by adventurers around the world). The exterior Mylar and sailcloth skin was custom made by Jason Fanjoy of Evolution Sails using materials by Sabic Innovative Plastics and NorthSails and laminated by Sign-o-rama in North Vancouver.

Metro Vancouver residents are encouraged to head into Gastown over the holiday season to check out ‘Make It Rain’ and everything else the neighbourhood has to offer. Nicely packed into four easily walked blocks, Gastown is home to independent shops, great coffee houses, some of the best culinary fare in the city and plenty of places to relax with a cocktail – or two.

Read more about ‘Make It Rain’: