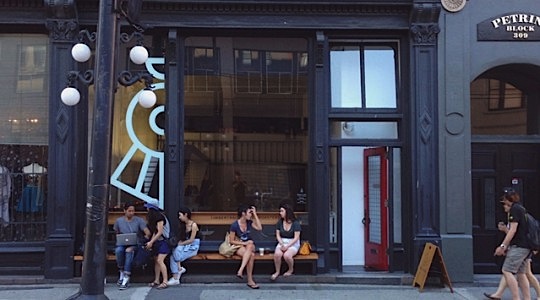 NEW ON THE BLOCK

Since its opening, Timbertrain has been making waves with local coffee connisseurs

Share-plate dining was on the rise with regional-inspired restaurants coming into the neighbourhood. New modern tapas eatery, Salida 7, celebrates Spanish foods and wines in a colourful tri-level space. Nicli’s Pizzeria opened Next Door, a sister establishment serving up an Italian approach to Spanish small plates. And, Tacofino’s flagship restaurant in Blood Alley (opening next week) is already one of Vancouver’s most anticipated new restaurant openings.

Newcomer, Brush Salon set up shop on Abbott Street, while those with a penchant for French designs can sift through Meuse Boutique‘s collection of toile-covered country chairs and dreamy dresses. Tantra Fitness moved in across from the Steam Clock, providing a fun, alternative form of exercise including aerial hoop and pole dance classes for all levels.

Kit & Ace opened their first retail studio in Gastown, where the team is currently developing a full fashion line of innovative technical cashmere. Online premier suit shop, Indochino opened up next door, offering a brick & mortar space to get measured, view fabrics and tap into some saavy styling advice. And it looks like Gastown is becoming a hub for stylish eyewear. Around the corner from Versace Home, Bailey Nelson is proudly showcasing their in-house collection of chic, reasonably priced spectacles, while on Water Street, Sara Moshurchak of Eyeland Framemakers revives the art of handmade custom eyewear with her new retail-studio space.

Perhaps it’s the world-class chefs, or inventive cocktails – Gastown’s vibrant restaurant scene continues to be the talk of the town. In the Golden Plate Awards issue, Georgia Straight readers voted Gastown as the Best Neighbourhood for Dining for the fourth consecutive year. Among the accolades, 15 Gastown eateries were chosen among Vancouver’s best in a number of restaurant categories. Style.com paid a visit to Neighbour, highlighting their curated lifestyle selection and Gastown’s ‘mecca of cool’ menswear shops. Haven’s retail concept was nominated as one of the best by fashion lifestyle site, Highsnobiety. Kinfolk Magazine took note of Old Faithful’s modern take on the general store in an interview with owner, Walter Manning. And, Secret Location‘s retail store and tasting room garnered the attention of Vogue Paris, who recognized the multi-brand concept as one of the world’s best in their November 2014 issue.

The ‘shop local’ movement continued to make waves in the neighbourhood. Local style mavens came together for an evening of style at the semi-annual Gastown Shop Hop. Over 40 boutiques celebrated new arrivals with treats, music, and in-store specials. An eventful summer kicked off with the return of Make Music Vancouver. Emerging musicians livened up the neighbourhood with a swirling soundscape of music styles from piano rock to world fusion. Revel Room owner, Dennis Brock, drew a crowd of dancers after he stepped outside the ‘room’ to rock out with his house band, The Revellers.

Global Relay organized the Gastown Grand Prix for the third consecutive year. Along with Olympic-caliber cycling, the annual race set the record for the most participants and the largest prize purse in North America for a single criterium.

Then, in August, food lovers from across the province gathered for a smoky weekend at the Gastown BBQ & Chili Festival. This year, 12 Gastown restaurants brought their cookout game and served tasty portions of the city’s best barbecue to raise funds for Athletics 4 Kids.

Everyone needs a break from time to time. The beloved Steam Clock took a little vacation to get some much-needed repairs at the fabrication shop. With the help of crowdfunding efforts, two local artists brought ‘Make it Rain’ to life, a reflective art installation that made the Steam Clock pedestal its temporary home. But if you miss snapping selfies, or hearing its signature toot – you won’t have to wait much longer. The iconic landmark will make a grand return in mid-January next year.