Looking Back through Gastown: The Arlington Block – Gastown 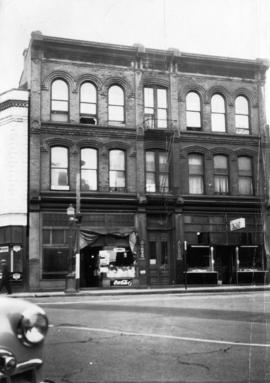 The building is typical of the many residential/commercial buildings built during the early twentieth century, when Gastown was the prime commercial and shopping area for the region. Designed largely as a rooming hotel, The Arlington served the dual purpose of providing centrally located accommodation (primarily to travellers, businessmen, seasonal workers and permanent residents) as well as housing two separate commercial spaces at street level. Its original owner was Dr. James Whetham and was designed by prominent architect, N.S. Hoffar. What began as the Simcoe Rooming House eventually became known as The Arlington Rooms from 1913 until the early 1950’s.

What is interesting about the building, with its three-storey brick structure and fourteen-foot ceilings, is that it was originally built with a depth of 66 feet, as per the British tradition at the time, to allow for an open courtyard space at the rear. The courtyard was eventually built upon in 1909, to house a printing wing of Thomson Brothers Booksellers.

The Arlington is significant, as it was one of the first original buildings in the neighbourhood to be revitalized.

“By the early 1960s the Arlington Hotel, like many of its neighbours, had deteriorated badly and was forced to close. The revitalization of Gastown really began here when, in the mid-1960s, property owners in the area conducted a painting campaign, instilling new life into the Arlington and surrounding buildings”. The Arlington Block still stands strong today, a testament to the quality and craftsmanship of many of the historic buildings here in Gastown. Current residents include clothing retailers – New World Designs and 017 Shop.