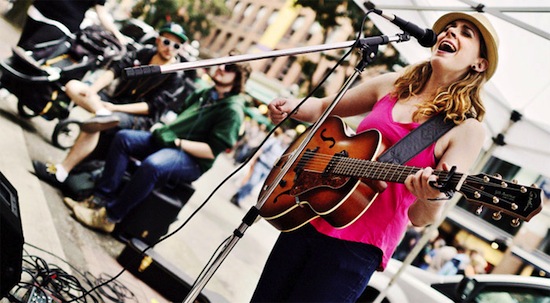 On Wednesday June 25th, 5-10 p.m., the streets of Gastown will become sidewalk music stages and dance floors to showcase over 100 street-level bands for the fourth edition of Make Music Vancouver, a free live music festival uniting the local community to celebrate music in all its diversity.

You might spot a star in the making at this year’s Make Music Vancouver. The lineup features a spectrum of talent playing all musical genres, from grassroots blues to alternative rock. Anyone can sign up to play, whether you’re an established rocker or amateur musician.

At 5 p.m. on Make Music day, Gastown will transform into a street party with dozens of musical stages set up along Water Street between Cordova and Carrall. Each live music act is assigned a 45-minute time slot, creating a whirling soundscape of musical styles moving from one corner to the next. After 10 p.m., the dance party continues at Gastown’s bars and restaurants.

This isn’t a stand-alone event. Make Music Vancouver is a part of the biggest international live music celebration inspired by La Fête de la Musique, an event launched in France in 1982, and has since gone global, taking place each year in over 450 cities worldwide today. In 2011, la Fete de la Musique made its way to Vancouver. The first-ever Vancouver edition was a resounding success, bringing 150 bands and 20,000 spectators to the streets of Gastown.

Come down to Gastown on Wednesday June 25, to celebrate the city’s cultural and artistic diversity!