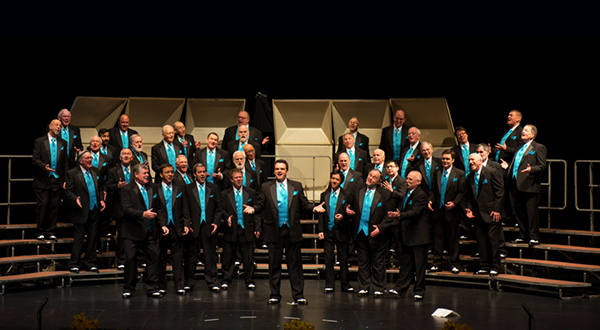 What’s really cool is that we got 20 groups to compete and they’re all super different. From pros to first-timers, from retirees to kids, from the highly trained to the… well, we’ll say high spirited.

We sat down with some of the choirs to get to know their unique personalities a little better before they go head-to-head in the streets of Gastown for the Yule Duel.

Ed from Gentlemen of Fortune

“We’re the best a cappella group in western Canada.”

I’ve been singing all my life in school choirs and church choirs, but I got introduced to barbershop quartet style by a friend in my mid-20s and quickly joined a quartet after that. Eventually, though, you get to that age where your life gets in the way, you raise a family and a son. But 14 years ago I retired and got back into it.

So you only got back into it after you retired?

Yeah, A really good friend of mine knew that I did baritone, which- we have the most difficult job, we get the notes that are left over, we’re the frosting on the cake. But that’s the thing about the hobby that I enjoy, there’s no class structure. Our group is really diverse. We have lawyers and truck drivers and retired guys, nobody cares what you do, we all love singing. We’re a bunch of hams.

Yule Duel is right up our alley. We’re always contributing [to charities], and we thought that this was a worthwhile cause.

Well, they say you never wanna follow kids or dogs, and we know there are a couple of kids choirs, so they’ll be tough acts to follow. But I think we’ve got as good a chance as anybody. We’ll be the barbershop chorus, and I think the audience will enjoy us. We’ll also have about 35 – 40 guys up there singing, so our presence will definitely be known.

Who’s your biggest competition do you think then? Nuthin’ but Treble?

Uh… I guess, it’s hard to know who the strongest competition might be. There are some quartets, There’s a lady quartet, Sweet Scarlet? They look like they’ll be hard to beat. But I guess it might depend on the judges.

Hm, I don’t have a strong sense of any particular style of music. I like traditional music, being a man of a certain vintage, I like Sinatra, I like Bublé. I listen to radio stations still. No country-western though, and no rap. I do love The Voice, there are some great performers on there.

Right on. So how can people checkout you out outside of Yule Duel?

We have our annual Soiree Christmas show in Coquitlam on December 12th at All Saints Parish, that’s going to be a lot of fun.

But we also rehearse every week, every Tuesday, and everyone is invited to sit in on rehearsals.

Our demo is people who grew up with the music we play. Any guy who thinks he can sing, we invite them to come audition. But you don’t have to be Frank Sinatra or Michael Bublé. I mean, it helps if you can sing. If not we’ll tell you to join a chess club. We take it seriously. What got you in to choir singing?

So we had a great high school program in West Van, and after that I joined a community choir, a few of us broke out of that under a record label [Nettwerk], and then we broke up in 2011. After that we threw out an open audition call, and managed to recruit a bunch of great girls who were really into a cappella and choir singing. We never really looked back after that.

Oh my god, we spent weeks and weeks trying to come up with a name! We were using a Google name generator at one point and it came up with some of the goriest names! There was a while where, every rehearsal, we had a different name. Eventually, we decided we liked “Scarlet”, because it’s feminine, it’s sassy, and it’s got an edge to it. And then “Sweet” makes it an alliteration, and it sort of rolls off the tongue. We wear a lot of red now, so yeah, it all works out.

Do you think you can win the Duel?

Of course! We can totally win! It’s a freaking thrown down, and let me tell you, Christmas is our game! We love Christmas so much, so we are just raring to go.

Whoa. So you’re getting pretty competitive?

Oh yeah. We’ve actually been thinking of sending some of the other choirs personal challenges, like over Facebook.  We wanna have that intimidation factor.  We’re sassy. We’re ready.

And so who do you think your primary competition is?

What are you listening to these days?

Pentatonix. We’re big Pentaonix lovers. All the girls are big fans, we’ve all seen them together, as a group, a few times.

Hold on, I’m actually with another one of the Sweet Scarlet ladies right now, let me ask her too.

Haha nice. Where else can people checkout you out outside of Yule Duel?

Sunday, December 13 is our Holiday Concert at St. James Hall, and $5 from every ticket sold is going to the Yule Duel charity [May’s Place Hospice]. “A cross between Pitch Perfect, The Nylons and Sister Act.”

It’s funny, my wife, Natalie works over at The Bloom Group, so I’ve known about Yule Duel forever. When she told me about it, it sounded like a ton of fun. We’re theatrical guys, I like a good Christmas sing along and the idea of singing Christmas tunes sounded like a good time. Also a number of bars we cover and work with are participating. And on top of all that it just sounded like such a good cause.

Cool. But are you sort of worried about your amateur status?

Yeah I mean, I’m concerned the other choirs are more seasoned, and we’re not… at all. But we have enough natural, raw talent that hopefully we won’t embarrass ourselves.

What do you think your chances are of winning?

Seriously? Slim to none. There are some, like, crazy 40-piece barbershop quartets, and even the Portside Pub, they brought in a ringer choir. Don’t get me wrong though, we’re gonna be in tough. Maybe we can win People’s Choice or something.

Are you going to maybe have a unique spin to give you an edge?

A little bit. The one thing we’re doing- we’ve comprised some original songs.

Yeah, one of the songs I wrote is about being “lit up like a Christmas tree”, so we’re trying to walk a fine line, since it’s a family event afterall. “Rum and Swag-nog” is the name of another one.

I think we might surprise some people. We’re going for a jazzy doo-wop spin on Christmas, a cross between Pitch Perfect, The Nylons and Sister Act. We’re drawing influences from wherever we can find ‘em.

You mentioned Portside, are there any other choirs you’re particularly worried about?

Oh man, I’m worried about all of them. Like Nothin’ but Treble? Those kids are taking it pretty seriously.  Hopefully the other choirs will help us raise our skill though, right? This is our inaugural year You gotta start somewhere.

What are you listening to these days? What’s in your iPod?