Behind the Scenes of a Gastown Photo Shoot – Gastown 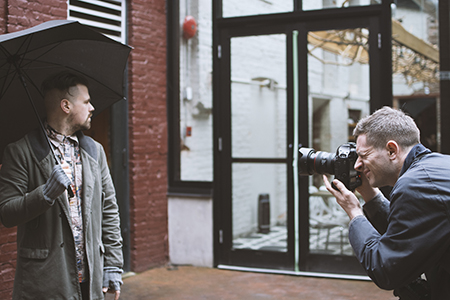 On Tuesday & Wednesday of this week, we hit the streets of Gastown with the people who live, work and play here for a photo shoot that would take us from the tip of Water Street all the way to Alexander. Armed with a pair of cameras, the photographer took the crew down streets, through alleys and into a few shops to capture the atmosphere of the neighbourhood. Cloudy skies added some drama, and yes, a little rain to the shoot, giving him the perfect opportunity to capture a classic ‘singing in the rain’ jump.

Gastown’s saw tooth skyline dates back to Victorian times, creating a rich, textured backdrop full of interesting spots to stop – like this much photographed alley between Cordova and Cambie.

If you mix and mingle in Gastown, chances are you’ll recognize a few of the faces we gathered together for the shoot. Starting early in the morning, the group bonded over coffee and then headed out into the rain. And as the camera shutter clicked away, conversation shifted from favourite movies to eastern philosophies. The rest of the shoot is under wraps for now, but expect to see the outcome on our social channels very soon. And that isn’t all that we have going on…

In December, we launched the first of our #MyGastown profiles here on the blog and via #IGtakeover on Instagram, enlisting insiders who know the neighbourhood best to give up the goods on where they shop, what they eat and who you need to meet. First up was Youna Choi (@brickandpendant) with a minimalist look at retail spaces and last month, Alison Page offered up a visual feast as she ate her way through the neighbourhood. This month’s contributor is sure to bring some serious style, so be sure to follow us @MyGastown. Snacks at Pony Salon, dinner at Cork & Fin and coffee with Megan from Olla Flowers. – photos by Alison Page

It’s going to be a big year in Gastown. Stop by anytime.