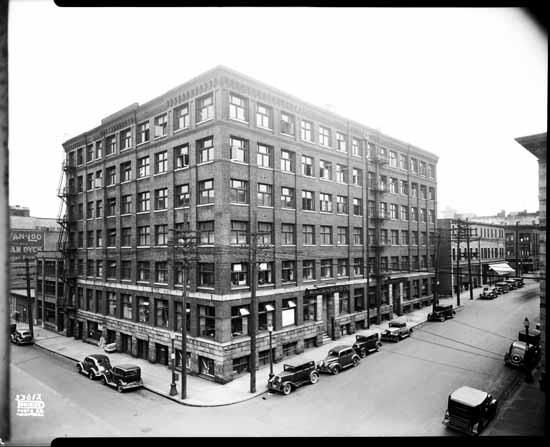 The Leckie family is one of Vancouver’s pioneer heritage families.  In the early 1890’s, Richard and William Leckie opened a branch of their family’s Toronto based John Leckie and Company.  Following the lines of the parent company, the Vancouver Leckie’s specialized in fishermen’s and marine supplies. Over the years, sales of boots to loggers, fishermen and miners formed a large portion of the local trade. Noticing the trend, the Leckie brothers began investigating the idea of manufacturing their own footwear instead of selling other company’s products.  In 1906 they purchased a small shoe factory and a tannery so that they would have complete control of their products. They quickly gained a reputation for producing quality footwear and soon outgrew their original location. They purchased a lot at the corner of Cambie and Water Street, the present location of the Leckie Building, and commissioned the firm of Dalton and Everleigh to design a new factory and warehouse for them. Leckie soon became synonymous with good shoes and boots – ‘Leckies’ were a must and were worn by both loggers and the fashion conscious. The J. Leckie Company was the major supplier of boots to the Canadian Armed Forces serving in both the First and Second World wars.