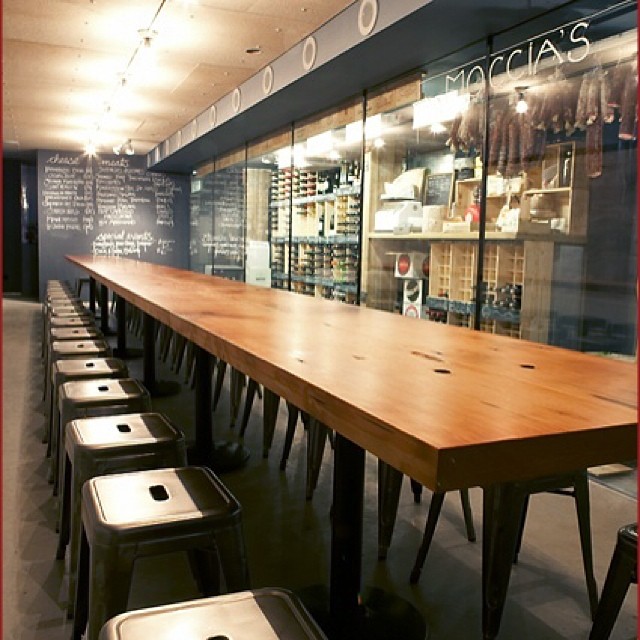 Focused on the subject of social appreciation for the consumption and sale of cheese, Heather spoke to attendees about the ins and outs of opening and running a restaurant that lacks both a kitchen and a head chef.

“There was a focus on the rules, the trials and the tribulations,” Heather noted. “It was a little different for each of us, but it was also the same.”

“We forgot about the people that were sitting in the room watching us, and started swapping war stories from our businesses,” recalled Heather. “It was a bit like that scene from Jaws when they’re on the boat comparing bite scars!”

It’s been eight years since Salt opened it’s doors in Gastown, but while Heather professes a solid knowledge of cheese, he’s quick to confirm that he won’t be adding the title of ‘cheesemonger’ to his business card anytime soon.

“Those people have forgotten more about cheese than I’ll ever know,” stated Heather. “I’ve got a pretty solid base of knowledge and I’ve been to a lot of cheese making facilities around the word, but I’m a business owner and a storyteller more than anything else.”

At Salt, that story has played out perfectly. Heather read an early shift in the dining community towards smaller portions of higher quality. “People are looking for a grazing kind of experience, a little bit of this and a little bit of that,” Heather noted. “But, Salt isn’t for everybody, it’s not to everyone’s taste – it’s a polarizing sort of restaurant.”

Salt Tasting Room specializes in artisanal cheese, small-batch cured meats and great wines. With a goal to know the first names of the people who’s products they serve, the establishment won every award available to it in it’s first year and continues to be ranked among the best in the city.

The Salt Cellar Series is a favourite among regular patrons, bringing carefully selected wineries in for a night of pairings and in-depth discussion. But, Heather believes that the best introduction for newbies is to come by on a regular night.

“We listen to what their preferences are and we tailor the plate to what they like,” explained Heather. “We’re often encouraging people to try sherry or sample one of our blue cheeses, but it’s all about their individual tastes.”

For Heather, the tasting experience is an affordable luxury, where every element is thoughtfully curated. Diners can treat themselves to a meal that is highly personal and always changing. In fact, some items on the menu appear and disappear during one sitting.

“That’s part of the pageantry of it, that the menu changes everyday,” stated Heather. “We know that within 30 or 40 minutes of opening, we’re going to be wiping something off that board.”

Heather has gone to great lengths to source the best products for Salt. Whether it’s Continental Sausage on Main Street, an apiary in the Similkameen or Neal’s Yard Dairy in London, he keeps up on who’s making what. “The best part of my day is going and finding new things,” Heather explained. “I’ll take the kids and head out to Agassiz for some hazelnuts, maybe go see the cheese lady or just drive out to Port Moody for some charcuterie – I’m always in the lookout.”

Among his favourites, a combination of Colston Bassett blue cheese with honey drizzled over it – something salty and creamy, with just the right amount of sweetness.

“I think that I’ve discovered almost everyone who’s out there,” noted Heather. “The days of me stumbling across an old Ukrainian butcher using antique German equipment are over… I think.”