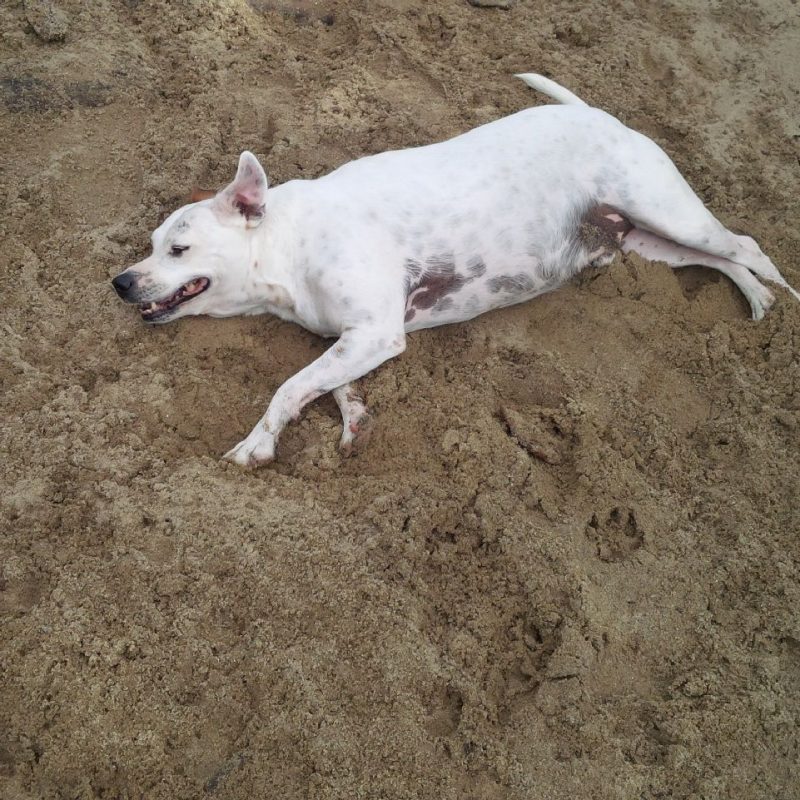 It’s hard not to get sentimental at this time of the year, especially when we’re talking about man’s best friend. So, we’re kicking this edition off with a pooch who went through the seven levels of the Candy Cane Forest, past the sea of twirly, swirly gumdrops and then, through the Lincoln Tunnel – wait that doesn’t sound right…

Let’s say he’s six and we’ll guess at least part Jack Russell. Truth is, no one’s sure because Poco Loco got his start on the streets of Mexico. A few years back, he found himself in Akumal, recently arrived in a shelter. The future looked bleak, but some well-timed puppy dog eyes earned him a passport and a trip to Vancouver (howling all the way). It wasn’t smooth sailing at the start, but poached egg bribes made all the difference.

Poco makes the real estate rounds with his person, regularly stopping in Gastown. And having earned a taste for the finer things, he can often be seen waiting for a sweetbread outside the door at L’Abattoir or enjoying a pint of Guinness at the Irish Heather. You may even catch him sniffing around Gassy Jack (um…ok).

Back at home in the burbs, he’s not big on toys, but he loves a good wrestle and has a soft spot for his Pom-Chi sister, Tika – and bears. Yes, bears. Since trading in city streets for forest walks, Poco has taken to ‘helping’ bears locate a suitable tree and climb it. What a sport! He’s also adjusting to a world where winter occasionally drops the white stuff at his front door. The cold isn’t bad, but the snowmen really freak him out.

Having said all this, you’d think Poco is a tough guy. Think again. He’s looking forward to the holidays and all the extra snuggle time they bring. On turkey day, he’ll be under the tree tearing into his presents – hopefully something of the textile variety. A self-professed clotheshorse, Poco will surely be modeling a new jacket come January. Poco stopping to smell the…well, there’s no flowers, but you get the idea.

Cruising the cobblestones on her way to the office, Olivia is the quintessential greeter. At Fully Managed, she accompanies the team on tours with potential partners and out on the street, it’s all about trotting along with the tourists. Take a wander by Milano Coffee and you may even spot her sniffing an Americano.

This five-year-old Pug is a valued member of the Fully Managed team. She’ll rally moral when the Command Centre gets slammed and even adheres to the company’s core values, being ‘absolutely accountable’ for cleaning up leftover lunches, providing ‘fanatical service’ by greeting every guest, demonstrating her ‘passion for technology’ by going viral in this article and ‘inspiring people’ with constant individual attention – aka tail wags & dog kisses.

Now that the days are short and the nights cold, Olivia has traded afternoon on the golf course for a spot by the fire, with visions of sugarplums dancing in her head. Her work in a high-tech hub has her wishing for a Surface Pro 3 or a Lync device under the tree – perfect for hosting boardroom video calls with her short-muzzled friends. But she’d settle for a puffy vest and a treat. Olivia holds court in the boardroom at Fully Managed, rocking a bow tie and some serious swagger.

And now for the ‘Best of 2014’. We scanned through all the photos tagged #DogsofGastown on Instagram and picked our faves. Did your shot make the list? If your holiday season includes those of the four-legged variety, wish them a merry one and consider submitting a nomination for the next edition of the Dogs of Gastown. Just snap a pic and tag us on Instagram (@mygastown) or tweet us @gastown.