Looking Back at The Grand & The Terminus Hotel – Gastown 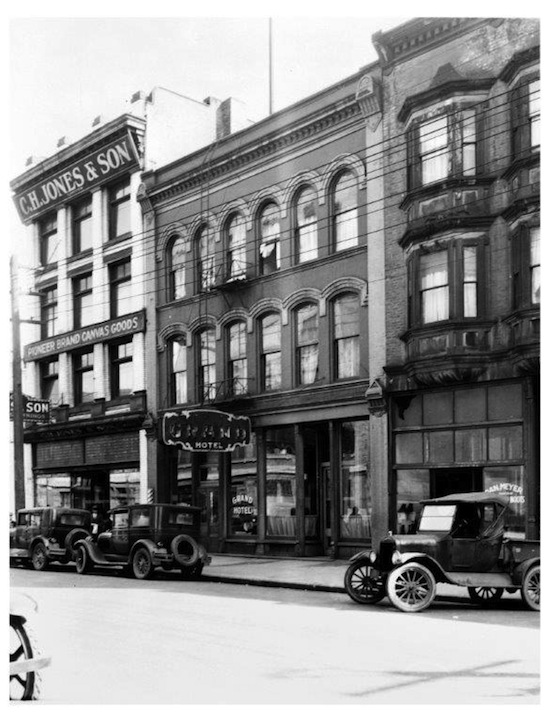 The Grand Hotel at 24-26 Water Street, originally named the Granville Hotel, was built three years after the Great Fire had devastated the early settlement that is Gastown in 1886. Its original owner, Thomas Joseph Roberts, was a prominent early Vancouver hotelier. Roberts owned and operated the hotel until his untimely and tragic death at age forty-two in 1918. Roberts and another man were murdered when a masked bandit attempted to hold-up a poker game he was involved in. He also built the adjacent building now known as the Cordage (shown to the left in the photo above) in 1911.

Beside The Grand Hotel, you’ll find the Terminus Hotel at 28-38 Water Street. It was built in 1901 and named after Vancouver’s position as the western terminus of the transcontinental CPR railway. You may notice a similarity in its distinct architecture. The Terminus Hotel was constructed for W. Jones and designed by Emil Guenther, who also designed the nearby Dominion Hotel.

The Grand and The Terminus Hotel have retained its heritage aesthetic – and are now home to retailers Litchfield, Orling & Wu & Zientte Interiors, and the newly-opened Mosquito.

For more on Gastown’s heritage, check out our throwback posts on The Packing House, Winters Hotel, and Springer-Van Bramer Block.