Fact of Fiction: The Haunting of Gastown – Gastown 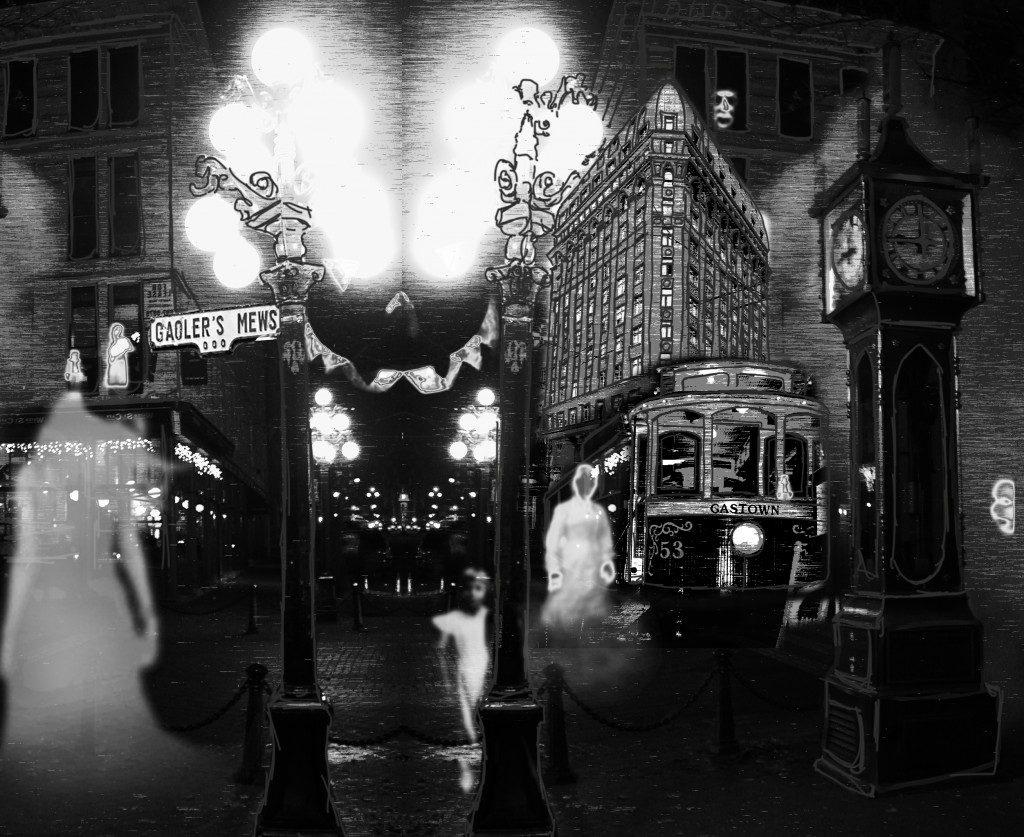 Tales of Terror, Darkness, and Steamclocks.

Gastown is the one of the oldest areas in Vancouver arguably, the most haunted.

Whether a dark spectral yarn be solid as a rock or fluffy as a feather, one thing’s for sure: Gastown has a dark history filled with many a bizarre tale.

Believe what you will, here are six alleged ghost sightings that will make even the harshest skeptic consider the terrifying possibility of ominous forces at play.

The Packing House (home to Monarca and Secret Location) resides on what was once the old Sunnyside Hotel (built in 1874, it was reconstructed after the Great Vancouver Fire in 1886). In the early 1900’s the Packing House Building was erected to serve as the Swift Canadian Company’s meat warehouse and cold storage plant.

The Mews was home to Vancouver’s first jail around the mid 19th century. Destroyed in The Great Fire of 1886, a brick fire hall was built in its space. Around the back is a cobblestone courtyard, where apparently, a hangman’s scaffold once stood. In full view of gathering public, the noose was pulled tight many times over, taking over 40 people to the grave. The Irish Heather was originally located here (217 Carrall Street) before relocating. There have been a number of sightings in the area. One is of a woman dressed in black, who many say is the widow of a misfortunate man hanged at the gallows. She has been seen behind the restaurant drifting along the cobble-stoned passageway where the hangings took place. She moves in a southerly direction, heading towards an iron gate that leads to Blood Alley. Once through the gate, she vanishes.

Once the location of a dusty, storied antiques market, the building at 28 Water Street (currently Sömn Bedding) has a rich history and an infamous ghost. One morning, the owner of the antique store arrived to open up his shop for the day and when he entered, what he saw made him freeze with terror. The heavy, aged oak dining table and chairs that stood prominently in the front window, were now completely upside down. Everything else in the store was untouched. He was the only person with access to the building, and had been home all night. There were no signs of forced entry nor was there anyone else, such as cleaners or repairmen, who could have done such a thing. 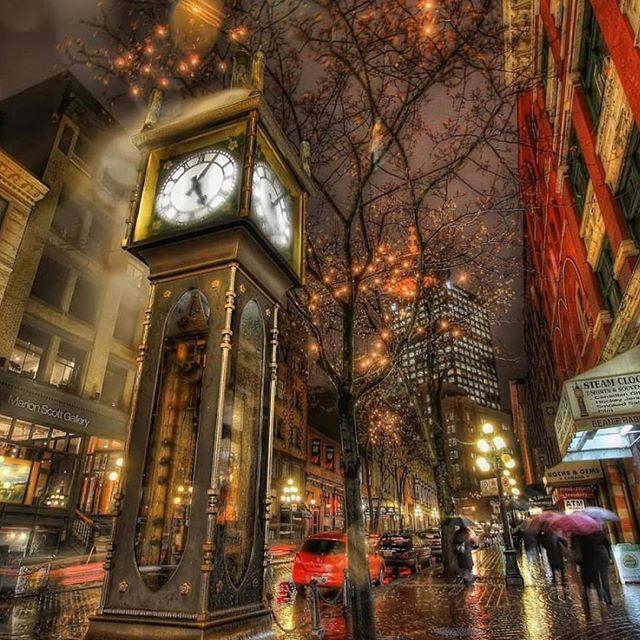 Post Script: We did mention Steamclocks in the title and it would be rude to shortchange you on a good story.

It was the late 70’s. The Gastown Steamclock was 2 years young and even then, something of an icon. October of 79′ had been brutal weather-wise, with early winter wind gusts culling old growth trees in the park, and the few leaves left hanging on above in the canopy over Water Street finally let go to join their brethren in great wet bunches below. Since its installation, the Steamclock ticked and tocked as orderly and accurately as a procession of the Queens Guard. From dawn til’ midnight each day, generous amounts of puffy white steam escaped every 15 minutes from four brass pipes affixed to each corner of the housing that contained a different facet of the dial.

Ricky Spink was the neighbourhood clean up guy. He preferred to work unsociable hours; early in the morning or late at night, or anytime that saw a general absence of people. He claimed that an empty street offered itself up to be reborn and that he said, made his job a whole lot easier. The truth was that Ricky was scared of most folks. His awkwardness and general display of weird behaviour whenever two or more people were around, resulted in a lonely life for the street cleaner, and truth be told, he was ok with all that.

Halloween 1979 came and went. The neighbourhood lit up with jack-o-lanterns and live jazz, along with an obligatory bit of disco. The clubs and pubs were happy with the turnout, and the costumed partiers drank their fill while dancing vicariously between the world of the living and the world of the dead.

Again Ricky Spink found himself all alone. He would often spend a sizeable part of his night cleaning up the trash around the steam-clock, long after the birds had gone to roost and for the most part when the alley rats hung around to gorge. The hour hand read 3 and minute hand 13.

Closing time soon, thought Ricky. He was tired. He wanted to get home to his Michelina’s Al Fredo Pasta dinner and his X-Files reruns. A big yawn opened his mouth wide as he peered up at the clock: 3.13 am. ‘I am tired’, he said to himself. It felt like 20 minutes had passed and certainly it had been at least 15, but old faithful there was stubborn as a mule and insisted it was 3.13 am. He didn’t care. It was broke and that was that. They’d figure it out in morning and life would go on just fine.

Ricky dumped the last bits of garbage into his cart and called it a night. Let me guess, he thought, 12 midnight?

He looked up at the south facing side of the clock through a layer of fog enveloping the timepiece.

His voice echoed off empty buildings, scaring a cat out into the open, who then promptly excused herself from the picture, swaggering off down a lane.

Ricky wanted to vomit but instead he blinked. He blinked 3 times slowly and rubbed his eyes to ensure he was most definitely seeing what was now displayed upon the clock…