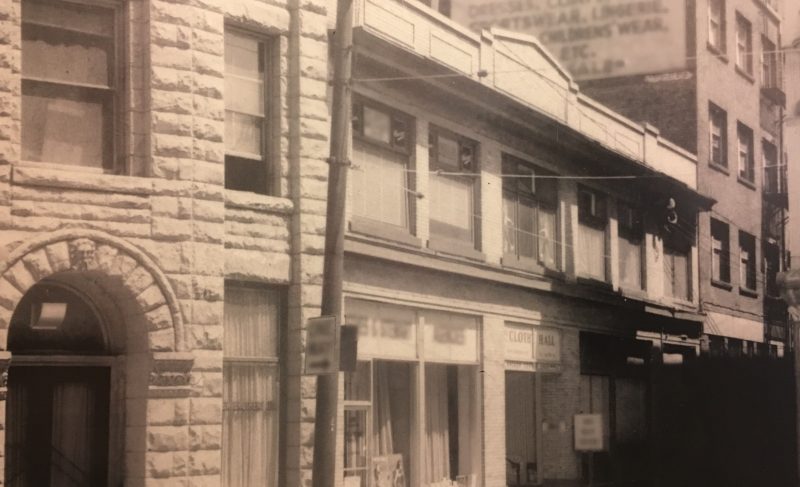 Gastown certainly has its fair share of historically significant buildings. Vancouver grew up here and walking along Water or any of our streets, is like finding an old leather trunk filled with photo albums – dig deeper and the story unfolds.

The neighbourhood is layered and within its stratum, exists many veins that feed the heart of this community: trailblazing pioneers who dare to dream.

Go hastily and you may just pass, one of the rarest, most interesting structures in Gastown. The Homer Street Arcade built in 1912, has been known by different names over the years, including “Cloth Hill” (later renamed Le Magasin as the result of a great vision by wild entrepreneur, Howard Meakin). As the only building of its kind in Gastown, such a structure was not common and remains as one of the earlier shopping arcades built in Vancouver.

The covered passage, with shops on both sides, served the bustling community with commercial and retail services. Its unique location allowed frontages on two sides, and joined by an internal walkway that connected Water, West Cordova and Homer Streets. The south facade fronts on an alley, but the irregular street grid allows a prominent exposure to the south, and this side was treated as the front facade and received the most elaborate architectural detailing. The facade facing Water Street was executed in a more industrial vernacular.

Valued for its architectural design, and its association with Stuart and White, the partnership of architects Bertram Dudley Stuart (1885-1977) and Howard E. White, who practiced briefly in Vancouver during the Edwardian boom era. As was common at the time, the structure was designed to accommodate additional storeys if expansion was required, but this never occurred due to the collapse of the local economy.

Its use as a retail arcade continued for many years. In the 1980s the Arcade was rehabilitated as ‘Le Magasin,’ and the building continues to serve its historic function. The sensitive rehabilitation retained original features of the internal passageway including its elaborate pressed tin ceilings which are unique to North America.
(source: http://www.historicplaces.ca/en/rep-reg/place-lieu.aspx?id=2553) World Time Globe Installation by Ray Saunders hanging above the stairs leading to the lower level.

The Homer Street Arcade is a Gastown gem, easily overlooked as it sits comfortably, nestled in between neighbouring buildings along Water and Cordova.

But there is more to the story. Above both entrances to the building – on the frieze facing South along Cordova and on Water, one will notice strange looking faces, similar in countenance, yet each entirely different. Le Magasin has recently undergone an enormous internal facelift. Whether entering from the Water side or the Cordova side, one will find a microcosm thriving both on the street level and lower levels. Resident shops and services include: Evo Car Share, Espace d, Boutique Amimoc, A.Y. Technologies, Coastal Peoples Gallery, Mexi-Can Holidays, L.A. Jeans, The Gastown Grooming Room, La Joia Jewellers and Menu Skateboard Shop. Passageway through to Water Street along the street level.