Then And Now: The Packing House – Gastown 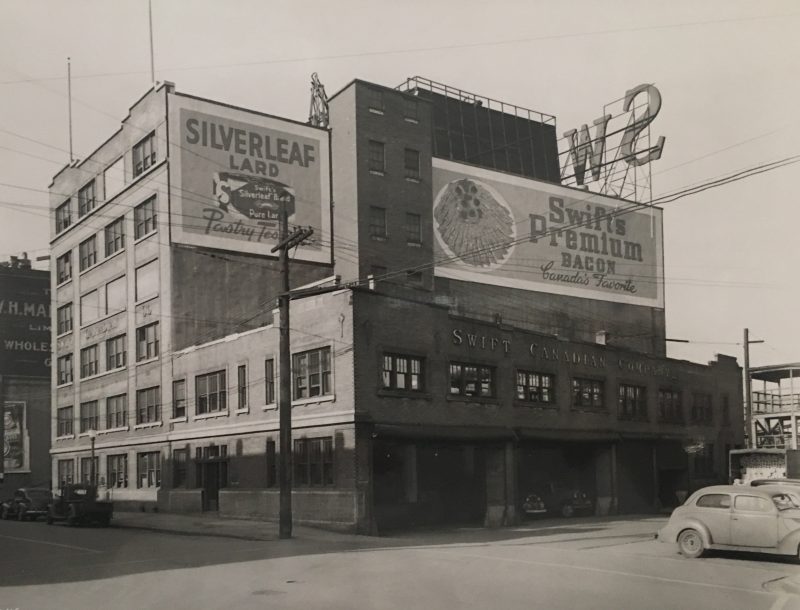 The Packing House still stands today, very much in its original exterior form with a history that is colourful and varied; much like the neighbourhood.

Its earliest inhabitant was the young city’s first butcher, George Black who located his butcher shop on this same site as early as 1868. The site was also home to The Sunnyside Hotel, built in 1874 and rebuilt in 1886 after the great fire of Vancouver. The Sunnyside became an important meeting place for early settlers. It was from the balcony of the hotel that Vancouver’s first Mayor, Malcolm McLean, gave his victory speech. As the hotel prospered, the site remained a core area for meat production, with Mr. Black selling the business to Alfred Coughtrey in 1885 who in turn sold it to Van Volkenburg & Brothers Butchers around 1888. Van Volkenburg sold his business to B.C. Cattle Co. Ltd., which later became Swift Canadian Co. Ltd. Built in 1912, the four-storey building served as the Company’s meat warehouse and cold storage plant. The two-storey addition to the east, which included the loading bays, was constructed in 1918.  The company continued to prosper and additional office space was required for the expanding business and in 1925 two storeys were added to the original building. The Swift Canadian Packing House and Office Building is representative of the importance of Gastown as the trans-shipment point between the terminus of the railway and Pacific shipping routes.  It also illustrates the development of an extensive food distribution network that grew in response to the rapidly growing local population.

As the 1960’s drew to a close The Packing House was taken over and renovated into a commercial office building. From 1978 to 1995, the building also housed Punchlines Comedy Club, where such well-known comedians as Howie Mandel and Robin Williams appeared. The club later became a popular nightspot called, The Purple Onion Cabaret. Today, the Packing House is home to independent fashion concept store Secret Location as well as Lowtide Properties, Industrial Light and Magic and a host of other tech and IT firms.

The historic value and importance of such a property remains priceless; to preserve the memory of those that were here before and to hold space for others yet to come.