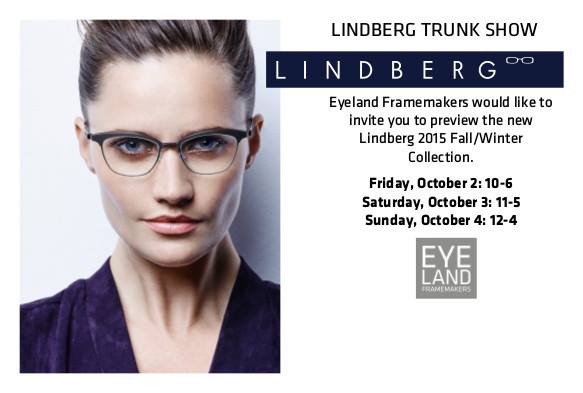 Fall fashion wouldn’t be complete without some new specs. Eyeland would like to invite you to preview the latest designs from the Lindberg Fall & Winter Collection, on October 2nd to 4th. Pop in to peruse their collection of sleek, sophisticated and classic frame styles. There are still more details to come – for more updates on the upcoming Trunk Show, head to their event page. Inform is hosting a discussion with George Baird in their 50 Water Street showroom on Wednesday, September 30th at 5:30pm on the occasion of the release of his new book Writings on Architecture and the City.

Writings on Architecture and the City is an anthology focusing on his on-going interest in planning and the built environment, something which is particularly manifest in his attention to the city of Toronto, where he is active in architecture, urban design and heritage preservation. The discussion will be moderated by local critic, curator, historian of architecture/urbanism, and consulting urban designer, Trevor Boddy. Q&A period and book signing will follow.

RSVP to info@informinteriors.com. Space is limited.

Now that fall is in full swing, most of us are in dire need of rest and relaxation. Instead of hitting the couch, join Nicole Bridger for a meditation class led by Christie Baumgartner on Tuesday September 29th, 7-8pm. This class will be admission by donation for the Strathcona Elementary School. If you’d like to attend, be sure to RSVP to info@nicolebridger.com and bring your own yoga mat.

If the cloudy weather is inducing a case of September blues, head to Blarney Stone for a good chuckle. Blarney Stone is welcoming aspiring comedians to test their chops at their new open mic comedy nights, hosted by Marathon mic every Tuesday. This night is not for the easily offended. If you want to take a swing at making the crowd laugh, sign ups start at 9pm, and the show curtain opens at 10pm. Florida producer Marcel Everett aka XXYYXX is coming to M.I.A. on Thursday October 1st. The 19-year old producer with a distinct moniker has made waves with indie audiophiles for his harmonious electronic music. The upcoming show is part of a new pop up event series dedicated to the ultimate “chilled out” music. Check here for ticket info.

On Saturday October 3rd, DJ/producer, Sian will spin live at M.I.A. Sian is regularly appearing at the world’s most respected clubs and festivals in Europe, Asia, Australia and beyond. Schooling heaving crowds, Sian brings his trademark experimental DJing style to the masses via multiple outputs of explosive techno, combined with FX and loops cut on the fly. His modern techno mixes are a little more bohemian than the average electronic talent. Come see for yourself – event details here. There’s definitely a love for coffee in our neighbourhood. The latest addition, Buro Coffee, is a new corner café offering an espresso based menu and fresh pastries in a chic meeting space. Coffee is made from Kold Electronic Grinders that run on reduced heat, perfect for anyone who likes a hint of floral in their cup. Try their coffee and check out the window view at 365 Water Street. Head to Salt Tasting Room and ask for the San Sebastián experiment. The beloved wine bar is collaborating with local specialty food vendor, Bosa Foods, to serve up free San- Sebastián tapas to hungry guest – just as they’re offered in tapas bars all over Spain.

If you’re ready for a taste of San Sebastián, order a tasting flight or glass of wine, beer or sherry, and enjoy complimentary tapas to sample Bosa’s new Spanish product line. The San Sebastián experiment is available now until October 11, from 3-6pm.

Alex Flock is a versatile guitarist with high-energy performances that traverse many styles. On Tuesday September 29th, he will join sassy soul singer, Emily Chambers for a special live set at Guilt & Co.

Ground Up: #ThisIsNotABand at Guilt & Company

The Mean Threes at Guilt & Company

The Modelos at Guilt & Company