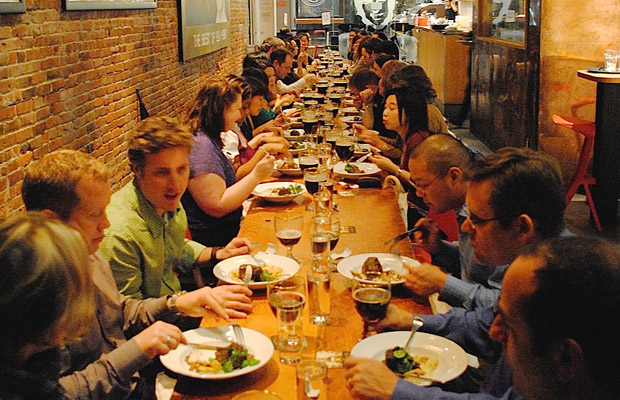 On Tuesday, March 25th, Bambudda, The Irish Heather, Nicli Anitca Pizzeria, Salt Tasting Room, and Pourhouse will be donating 25% of their total food sales to support Dining Out For Life.

Dining Out For Life is BC’s largest restaurant fundraiser and it benefits two great Vancouver charities: Friends For Life and A Loving Spoonful. These organizations provide support to people living in our communities with HIV/AIDS. All proceeds directly benefit the programs and services they provide free-of-charge. Come support this great cause! Join Art Speak on Monday, March 24th at 7 p.m. for the launch of Joseph Conoway’s Get Back Stay Back: 2nd Generation Back to the Landers in Maine. Joseph began his freelance career in 2008 while relaunching the UK-based magazine Drift Surfing for Polestar Publishing. He has since created original content and copy for ESPN.com, Converse.com, CBS MoneyWatch, DowJones.com, Good.is and contributed to Anthology Magazine and The Surfer’s Journal.

Get Back Stay Back was published by the Publication Studio Portland (other) at the Institute of Contemporary Art at Maine College of Art in collaboration with Leisure Labor (Los Angeles) as part of a nation-wide public art project that reframes independent publishing within the context of traditional white wall gallery settings. On Saturday March 29th, Sugar Skull Studio is hosting their first ArtRoots show of 2014, supporting talented artists of Vancouver in the heart of Gastown. ArtRoots is a unique experience with local art, live flash tattoos, friends, fun, and good music. View the list of local artists that will be joining Sugar Skull Studio on March 29th. Join Clough Club this Tuesday March 25h to celebrate their two year anniversary of Tiki Tuesday. This event will include Tiki Mug Takeaways, Tiki Buffet, and Havana Club Mai Tai’s on special from 6 p.m. to 1 a.m.

This Friday March 28th, Shine Nightclub presents DJ Rashad & DJ Spinn. DJ Rashad has been instrumental to the creation and evolution of Chicago Juke music and has been lifelong friends with other key players on the scene, such as DJ Spinn. He has the ability to blend elements of house, ghetto house, disco, juke, and ghettotech together with a knack for creating sparse, snappy tracks that manage to convey a physicality and funk with a spectacular precision.

Along with his teammates DJ Spinn and DJ Gant-Man, DJ Rashad has become notorious for making juke anthems that have made fans outside the world of Chicago mix cds. He’s DJ’ed across Europe and released records on Juke Trax and Databass records earlier on in his career and some big remixes and collaborations are in the pipeline. On Monday March 24, Clark Graham will grace the stage at Guilt & Company. Fresh from a successful stint in Los Angeles – this accomplished young man has made a name for himself south of the border and has come home to do the same on home turf. With his poignant lyrics and multi-instrumental skills, Clark is a talent to keep an eye on. View Gastown’s weekly live entertainment lineup below.

The Colorifics at Guilt & Company