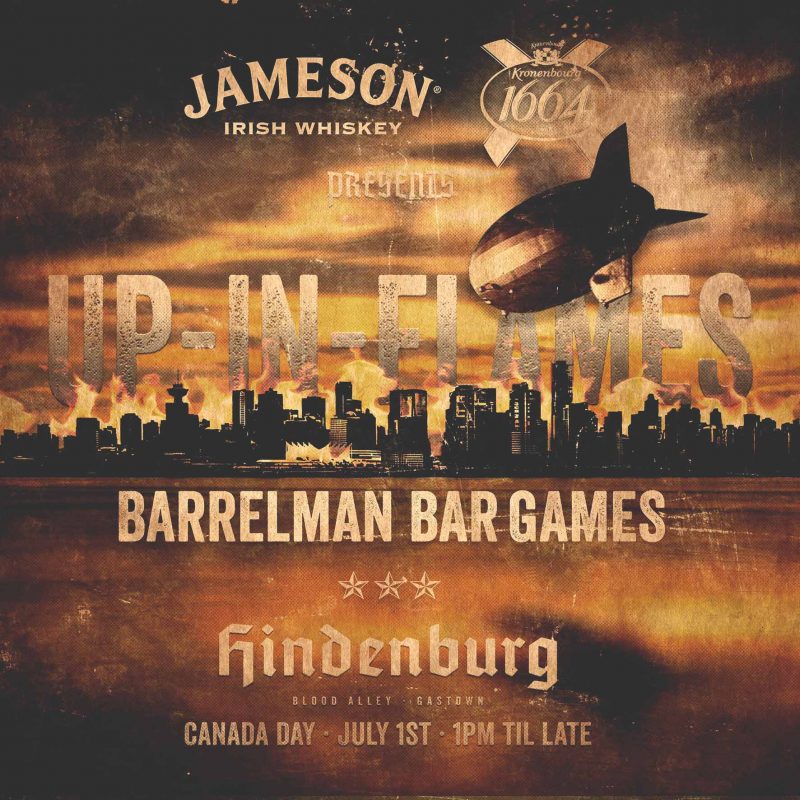 Are you looking for some pre-Canada Day fireworks? Dashing Date is popping up at Rainier Provisions for an event that promises to help those looking to meet their match. Get social and meet new people on Tuesday, June 30 starting at 7:30pm. Tickets are available here.

UP IN FLAMES CANADA DAY EVENT

The Hindenburg invites everyone to Blood Alley on Canada Day for the craziest industry event to date. Free Entry! In association with Jameson Irish Whiskey and Kronenbourg 1664, some of Vancouver’s greatest bar ladies and gents will be heading to the Hindenburg on July 1st to vie for prizes and bragging rights in the 2015 Jameson Barrelman Bar Championship. Participating teams will compete in a series of rigorous bar related challenges, including the ice bucket relay, citrus juicing, fridge restocking, cocktail making and more, while running through an obstacle course of tires…wait, what? Come down, catch the action and cheer them on.

Canada’s 148th birthday is coming up and Blarney Stone is getting the party started in early fashion. Come down on Tuesday June 30th for performances by The Sheets and DJ S#arpe, enjoy extreme poutine dishes and countdown to Canada Day with a grand balloon drop and Canadian themed drinks. Tickets can be purchased here.

CASK NIGHTS AT THE IRISH HEATHER

Gather friends in hoisting a pint for The Irish Heather’s Cask Nights on Thursday July 2nd. Running every second Thursday through Sunday, The Irish Heather will feature a new cask produced by a leading beer producer with sleeves priced at $6 (16oz). Any beer left over will be served on “finish our cask Sunday,” where cask beer will be priced at $5 per sleeve until it runs out.

You’ll want to grab a bib for this one. The Blarney Stone is teaming up with Alexander Keith’s to host a tasty, three-course lobster dinner with complimentary Alexander Keith’s and Goose Island IPA drafts. The 1.5lb lobster taken straight from the salty waters and into the pot is complimented with a choice of two starters and a creme brulee with gingersnaps for dessert. Visit here to purchase your ticket.

On the last Tuesday of every month, the forces of Luciterra and Chris Murdoch join together for their signature full-length show at Guilt & Co. This unlikely match of fusion bellydance and circus is quickly growing into one of the hottest shows on the West Coast.

The show is a blend of the freshest fusion bellydance, contemporary dance stylings, contact juggling and fat beats. Backed by an eclectic collection of self-mixed music selections, Luciterra and Chris Murdoch will take you on an elegant old-world meets new-school journey through music, sound system culture, circus, and dance.

We Were Friends at Guilt & Company

The Modelos at Guilt & Company