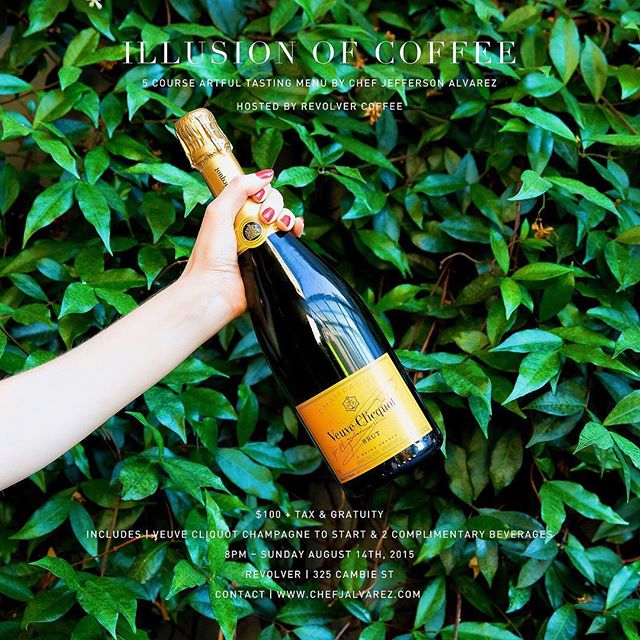 Chef Alvarez, When They Find Us and Revolver Coffee have teamed up for the ‘Illusion of Coffee’, an exclusive pop-up dining experience happening on Friday, August 14th. Join them for a night of decadence and wonder as they navigate guests through an elevated five-course dinner set to redefine the concept of coffee. This special event includes two complimentary drinks from Veuve Clicquot.

Seating is limited. To purchase your ticket, click here. Bauhaus Restaurant is hosting a very special 7-course Foxtrot dinner on Thursday, August 20th, showcasing wines from Foxtrot (one of the top producers of Burgundian-style wines in Canada) and its offshoot, Wapiti Cellars.

Winemaker Gustav Allander will be in attendance to speak about his award-winning wines, which will be paired with Baltic-inspired dishes created by Chef Stefan Hartmann as a tribute to the Allander family’s Swedish roots, and influenced by Hartmann’s own personal experience growing up in Northern Germany.

For the Foxtrot dinner, guests will get to sip on Wapiti Cellars’ 2012 Viognier and 2013 Pinot Noir rosé, as well as Foxtrot’s ‘Four Shadows’ fantastic 2013 Chardonnay, the newly-released 2012 Pinot Noir and the award-winning 2007 Pinot Noir. Expect their bar team to be mixing Swedish-inspired cocktails throughout the night.

DEEP DOWN INSIDE AT M.I.A

Get Deep Down Inside every Saturday in one of North America’s most intimate rooms to feature the industry leading Funktion One sound system. To support the local artist community, Float House invites emerging local artists to display their artwork in their Gastown space.

Currently, Float House is featuring vivid paintings by Czech Republic artist, Jan Kasparec. Jan has travelled all over the world to over 70 countries and creates colourful artworks inspired by his global adventures.

During the period his artwork is showcased, Float House welcomes Jan to float once a week in hopes that a new piece of work will spawn from his experiences inside the tank.

Alexander Gastown is teaming up with Timbre Concerts to launch ‘Alexander’s Great Comedy Night’ with hosts Dino Archie and The Freshest DJS. Comedy nights get underway every Sunday at 9pm with a new weekly rotation of up-and-coming comics.

For guest list and table service, email info [at] alexanderjoomla-gastown.studiopalms.com.

On Monday August 24th, Chef Robitaille will take guests on an exclusive culinary for their wine dinner series. The upcoming dinner will highlight B.C. cuisine with expertly paired wines. If you’d like to reserve a spot, please call 604-720-3145.

There’s a new bridal boutique in the neighoubrhood. Truvelle has opened its first brick & mortar location where bride-to-be’s can view Gastown designer Gaby Bayona’s collection of handmade bridal gowns. The new storefront on 235 Cambie provides modern bridal inspiration and is available for both drop-ins and appointments from Tuesday to Sunday from 12 – 6pm. Gastown’s newest barbershop has arrived. Veteran barbers Nick Hickling and Jake Hurn hold down the forte, located at 77 E. Cordova. Get yourself cleaned up with a hot towel shave or ‘stache/beard trim, or stock up on homemade pomade, beard oils and moustache waxes.