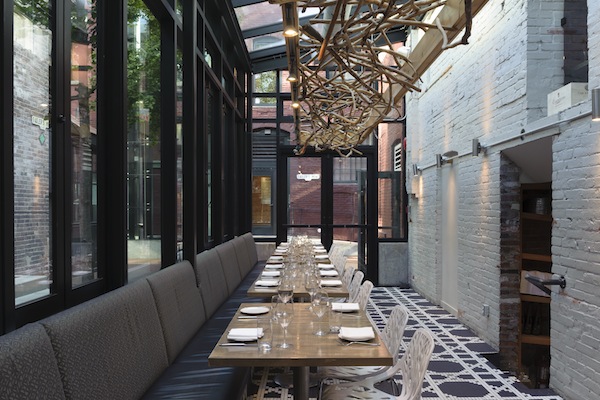 British Columbia has a lot to brag about, especially when it comes to food and wine. On Tuesday August 25th, Wines of British Columbia, along with some of the province’s most celebrated chefs will honour the 25th anniversary of B.C. wines with a special dinner in L’Abattoir’s private dining room.

Join Executive Chef Lee Cooper when he hosts guest chefs Vikram Vij of Vij’s, Scott Jaeger of The Pear Tree and Bernard Casavant of Okanagan College. The evening will include exquisite food pairings with some of B.C.’s best wines.

Joined by these top chefs are special guests Steven Spurrier (Decanter Magazine and the Judgment of Paris), sommelier and emcee DJ Kearney, as well as B.C. winemakers.

Tickets are $185 per person, and include a sparkling wine reception, wine, food and gratuity; taxes are extra. For more information and to purchase tickets click HERE. Share good times with good people all for a good cause. Whisky Wisemen is kicking off Third Thursday, a monthly #socialwhisky event, on August 20th at Shebeen Whisky House.

Whisky Wisemen events are a fun way to connect with existing friends and meet new people. Whether you come alone or with a group, there is something for everyone, including the city’s best whisky selection at Shebeen (tucked inside the Irish Heather).

As always, there is no cover charge and the first 50 people to arrive receive a free ounce of whisky from their partner, Glenmorangie. After that, 10% of your total spend for the evening will go to their YVR Chapter 2015 charity partner, Power To Be Adventure Therapy Society as will $1 from every one of our signature Wiseman cocktails sold. Bauhaus Restaurant is hosting a very special 7-course Foxtrot dinner on Thursday, August 20th, showcasing wines from Foxtrot (one of the top producers of Burgundian-style wines in Canada) and its offshoot, Wapiti Cellars.

Winemaker Gustav Allander will be in attendance to speak about his award-winning wines, which will be paired with Baltic-inspired dishes created by Chef Stefan Hartmann as a tribute to the Allander family’s Swedish roots, and influenced by Hartmann’s own personal experience growing up in Northern Germany.

For the Foxtrot dinner, guests will get to sip on Wapiti Cellars’ 2012 Viognier and 2013 Pinot Noir rosé, as well as Foxtrot’s ‘Four Shadows’ fantastic 2013 Chardonnay, the newly-released 2012 Pinot Noir and the award-winning 2007 Pinot Noir. Expect their bar team to be mixing Swedish-inspired cocktails throughout the night.

Want to learn more about B.C. cuisine? Chef Robitaille is plating exclusive dishes for Notturno‘s wine dinner series, which returns on Monday August 24th. This month’s dinner will take guests on an exclusive gastronomic journey featuring local fare with expertly paired wines. Seating is limited. If you’d like to reserve a spot, call 604-720-3145.

Nightlife venue, M.I.A., is set to host some exciting shows this month. Emerging producers, Joy Orbison and Ben UFO will stop by on Thursday August 20th. Committed residents, Wolfey and Samuel will also be spinning tunes before J/B hit the building. Purchase your tickets here.

To support the local artist community, Float House invites emerging local artists to display their artwork in their Gastown space. Currently, Float House is featuring vivid paintings by Czech Republic artist, Jan Kasparec. Jan has travelled all over the world to over 70 countries and creates colourful artworks inspired by his global adventures. During the period his artwork is showcased, Float House welcomes Jan to float once a week in hopes that a new piece of work will spawn from his experiences inside the tank.

There’s a new bridal boutique in the neighoubrhood. Truvelle has launched its first brick & mortar location where bride-to-be’s can view Gastown designer Gaby Bayona’s collection of handmade bridal gowns. The new storefront on 235 Cambie provides modern bridal inspiration and is available for both drop-ins and appointments from Tuesday to Sunday from 12 – 6pm. For a good chuckle, check out Alexander Gastown’s Great Comedy Nights, happening every Sunday with a new weekly rotation of up-and-coming comings. NYC’s Cipha Sounds, of Hot 97 and Chappelle’s Show fame, brings his stand up act on this Sunday August 23rd.

Cipha got his first break interning for Funkmaster Flex and earned opening slots at legendary NYC nightspots like the Tunnel and the Palladium. Soon after, he found himself spinning for Lil Kim, Mos Def and Jay-Z on national tours, and helped turned once-unknowns like Sean Paul, 50 Cent, Pitbull, Rick Ross, Rihanna into superstars, while maintaining a healthy sense of humor on the mic.

In the past few months Cipha has become the first comedian to sign to ROCNATION management and has teamed up with Alicia Keys to develop a Television Series.

For guest list and table service, email info [at] alexanderjoomla-gastown.studiopalms.com.

Comfort your Monday blues with dirty soul from Sam Pace & The Gilded Grit. The three-piece band hails all the way from Austin, Texas and will be gracing the stage at Guilt & Co today (Aug 17). Come along for the ride – the show begins at 9pm.

The Darlings Cabaret at Guilt & Company

This is Not a Band All Star Edition at Guilt & Company