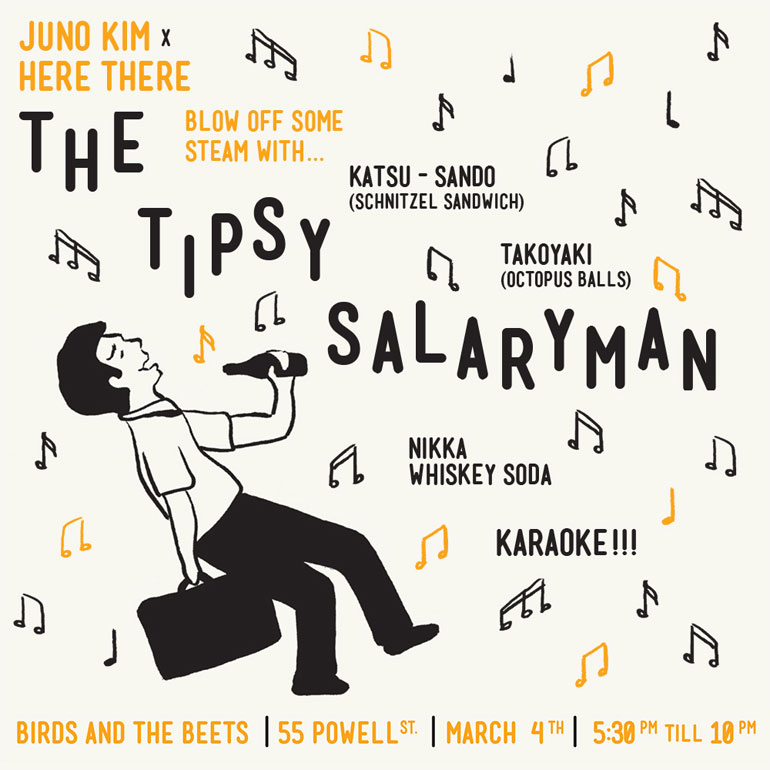 Juno Kim is coming to Birds & The Beets, and he’s bringing some friends. On Friday, March 4th, starting at 5:30pm, the famed chef will be settling in at the Gastown social spot for ‘The Tipsy Salaryman’. It’s an evening of eating, drinking and singing that you won’t soon forget. The event brings Kim together with Lizzy Karp and Ken Tsui. The trio will transform Birds into a Japanese coffee shop with schnitzel sandwiches, octopus balls, Nikka whiskey sodas and a live mic – yup, we’re talking karaoke.

It’s walk-in only, no tickets or resos, and based on the last few events, it will be busy. So, get there early!

Drop by Pourhouse this Sunday night for signature cocktails and some live jazz. The Alvaro Rojas Trio will be bringing some smooth sounds to the spot on March 6th from 7-10pm.

On March 4th, Gallery Gachet will open the EDZY EDZED retrospective. The production extends from the exercise of obsessive–compulsive impulses, an interest that led him to years of independent study. His thousands of works manifest as a personal visual meta–language that can be described as “Deconstructivism”. It’s a study of non–objective (abstract) painting in “western art history” through the filter of deconstruction in an effort to realize un-invented painting forms. The exhibit runs through to April 10th, growing and evolving throughout. Fresh off his second Grammy win with Snarky Puppy, Cory Henry will be popping in to Guilt & Co on March 16th. He’s an in demand multi-instrumentalist who has worked with an array of musical legends, including P. Diddy, Bruce Springsteen, The Roots and Boyz II Men. It’s not happening this week, but I dropped it on the list because you might want to get tickets while you can! Last week’s weather has everyone thinking spring. Inform Interiors will be unveiling their outdoor furniture picks for 2016 starting March 3rd (and they’re on sale). It’s time to get outside!