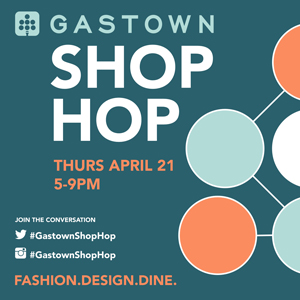 The Gastown Shop Hop is a unique social-shopping experience, not to be missed. For one night only, retailers will open their doors until 9pm to showcase the latest looks for stylish locals. Think eyewear, accessories, shoes and everything in-between, as well as décor boutiques that have everything you need to ensure your home is as well dressed as you are. It’s a chance to mix, mingle and maybe reinvent your style. Are you ready to try some of Austria’s best? This month’s wine club – scheduled for April 20th at 7 pm – will feature a special selection of Austrian wines procured by Bauhaus owner and wine connoisseur, Uwe Boll.” After eight months of work and negotiation, I was able to import a number of Austrian wines, now exclusively available at Bauhaus. I’m so pleased to be able to share these wines with our guests,” says Boll. The wine club will feature one Austrian white and four amazing reds from Burgenland, all awarded 96 to 100 points. Wineries featured include Salzburg, Heinrich and Gsellmann Bela Rex. The wines will be offered for approximately 60% of the standard list price and served by the glass. Chef Stefan Hartmann will also be preparing a special wine pairing menu, inspired by the bottles being sampled that evening.

This Thursday brings an opportunity to Meet the Makers on Thursday, April 21st from 5 to 9. Meet some of the exceptional entrepreneurs behind the brands that are carried at The Capilano. Enjoy complimentary Botanical Soda cocktails, light snacks and other surprises. April 20th is National Canadian Film Day. Screeings are happening all over the country, in every province. But you don’t need to take a redeye to Toronto to see our finest homegrown cinematic offerings. Gastown’s Vancouver Film School on Water street is participating with a rare screening of Donald Shebibs – Goin Down The Road, 1970 (7pm screening)

Goin’ Down the Road is a key 1970 Canadian film directed by Donald Shebib, co-written by William Fruet and Don Shebib. It chronicles the lives of two young men from the Maritimes to Toronto, chronicling their hopes of finding a better life. It stars Doug McGrath, Paul Bradley, Jayne Eastwood and Cayle Chernin. Despite the lack of a large production budget, the movie is generally regarded as one of the best and most influential Canadian films of all time and has received considerable critical acclaim for its writing, directing and acting. Who Made My Clothes?

It’s a Fashion Revolution At Nicole Bridger and you’re invited!

Join us for a morning of powerful conversation.

Light breakfast and mimosas will be served.

Please make sure to RSVP to info@nicolebridger.com

Space is limited. To find out more about #FashRev click here.

Few DJs have made such a dramatic impact on the underground house and techno scene over the last few years as Lee Foss. Described by DJ Mag as “one of the most talented new forces in modern dance music today” and by fellow future house innovators Art Department as their favourite producer, Lee has firmly established himself in dance music’s collective consciousness.

It’s happening at the Alexander in Gastown this Saturday April 23 with TRAVIS SCOTT’s official DJ Chase B.

Anything can happen at the night show….tickets on sale now here: