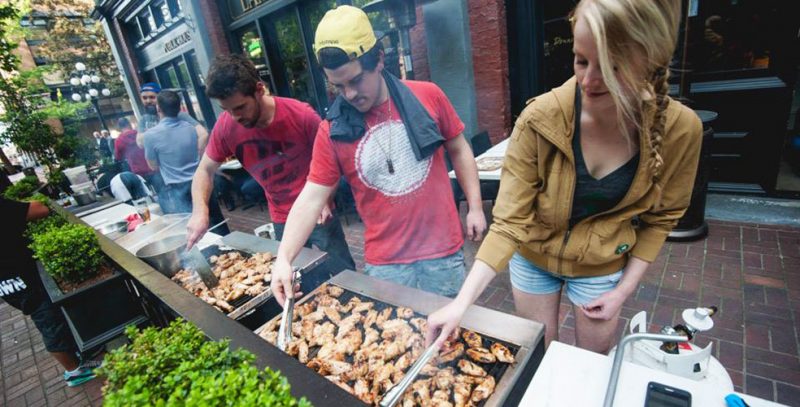 Gastown Chicken Fight at The Lamplighter

Sunday, May 22 at 4 p.m.  The Lamplighter Public House, 92 Water Street

The Gastown Chicken Fight, is back for it’s fifth year!

The Lamplighter Pub will host the traditional BBQ battle on Sunday, May 22 starting at 4pm.   Local Gastown restaurants come together in a fun and friendly competition to see who can make the best darn tastiest chicken wings this side of Hastings Street. Saturday night before the contest, each team is given 20lbs of wings and a bottle of Lot 40 Canadian Whisky, which they must use in their recipe. They’re then sent away to work on their creations, which are live grilled on Lamplighter’s patio on Sunday. Gastown’s designation as a National Historic Site of Canada will be offically recognised tomorrow with the unveiling of a plaque by Mayor Gregor Robertson at the Gassy Jack Statue. Gastown received a national historic site designation by the federal government in 2009. This is an opportunity to publicly recognize the hard work and dedication of our business owner’s and entrepreneurs in maintaining and preserving the original site of Vancouver which is of immense historic importance. Ardbeg Distillery at The Irish Heather

The Irish Heather will host the Ardbeg ambassador for a scotch tasting and dinner this Wednesday.

Join Ruaraidh MacIntyre, the Ardbeg/Glenmorangie brand ambassador, for a wonderful whisky supper at The Irish Heather and Shebeen Whisky House.

The evening will commence with an Ardbeg-based cocktail in the Shebeen. Then revelers will move to the Irish Heather Long Table, where MacIntyre will help you taste your way through Ardbeg 10-year, Ardbeg Auriverdes, Ardbeg Perpetuum and an Ardbeg surprise .

Following the tasting, a supper will be served of Braised Lamb Shank, Gnocchi, Beans & Peas, with a Chocolate Coffee Mousse for dessert. The dinner will also offer vegan, vegetarian, gluten-free and dairy-free options.

Mealshare’s “Tonight For Tommorow” At Bauhaus.

On Wednesday May 18th, Bauahus will be joining eleven other Vancouver restaurants in the fight against youth hunger by participating in Mealshare’s fundraiser, Tonight For Tomorrow. For every dollar spent on food at Bauhaus on the evening of May 18th, one dollar will be donated to help grow Mealshare! Many of Vancouver’s most prominent city landmarks and buildings will be lit up in orange to support Mealshare’s fight against youth hunger. It will be an evening of delicious food, prizes, and social impact. If you’re planning on eating out at all in May, make sure it’s on May 18th at Bauhaus.

Join other writers for the third Thursday of every month – workshop your work and help others with theirs. A Brainstorm is brewing in Gastown!

Featuring one of the most gifted, beloved powerhouses of comedy, the brilliantly edgy Simon King. You do not want to miss what promises to be a hilarious, thought-provoking – perhaps even mind-bending experience!  This spectacular night of belly laughs will be hosted by the incredibly talented Jesse Caroll and the cherry on top is this fantastic lineup of some of Vancouver’s finest and funniest comics.

Get Deep Down Inside every Saturday in one of North America’s most intimate rooms to feature the industry leading Funktion One sound system. M.I.A. goes Deep Down Inside every Saturday in Gastown with world renown deejay & producer talent supported by a rotating roster of local Vancouver resident DDI selectors. Join Sweden’s John Dahlback with Support From:THOMAS MAXEY + ACT NATURAL as they play the finest future & classic deep house cuts until 3am.