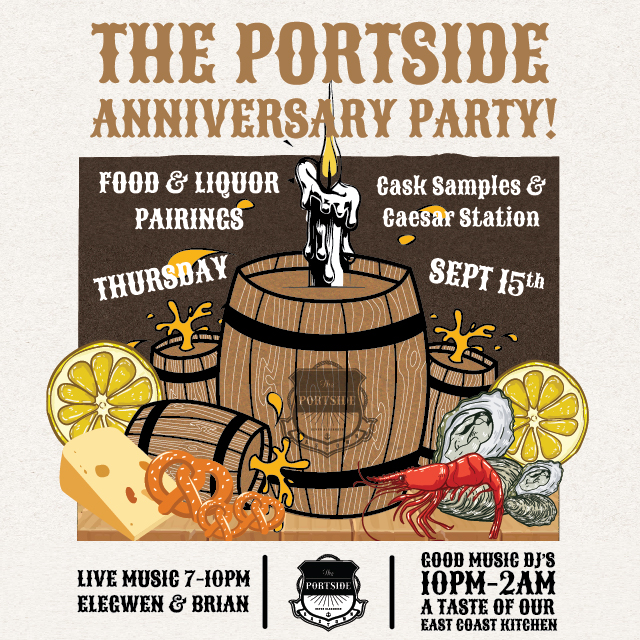 Happy Birthday! To celebrate, The Portside is throwing a huge birthday bash and YOU are invited!

Join in for cask samples from some of their favourite local breweries, a taste of their East Coast Kitchen, Caesar bar, Oyster pairing, and live music. All complimentary!

How to attend this fun filled evening?

With live performance by Star Captains

Join in for the 6th Annual Gastown Shuffle!

The Portside Pub, The Charles Bar, Clough Club, The Metropole Community Pub (Gastown, Vancouver), The Blarney Stone and The Lamplighter Public House are all coming together to create the best scavenger hunt you’ve ever been on.

Getting in on the action is simple…
Pick up your Gastown Shuffle pass from any participating venue. Your pass will serve as a punch card and allow you one complimentary cocktail at each of the above venues. Once you’ve punched in at all venues, you will receive free cover into the after party at The Lamplighter!

The after party is featuring the Vancouver based band, Star Captains and live DJs.
For more information, please email or click here. Come for refreshments and to bid a fond farewell to the old space. Over the past eight years Robin Layne has become a regular fixture on the B.C. festival circuit, collaborating with a wide spectrum of folk and world artists. His recent touring engagements have led him to Mexico, Italy, China, the U.S. and Canada. He has followed his love of world music to Cuba, Guinea, Mali, and Mexico studying under master drummers and marimbists of those respective traditions. He currently performs with world music groups Locarno, Tambura Rasa, and Mazacote and is in demand as a freelance percussionist for recordings, performances and tours. Recent highlights include working with Juno Award winning artists Quique Escamilla, The Paperboys, Donne Roberts (African Guitar Summit), Alpha Yaya Diallo, Celso Machado and Silk Road Music. On sale now at timbreconcerts.com and at Red Cat and Zulu!

R&B/pop singer-songwriter, on tour to support her debut self-titled release.