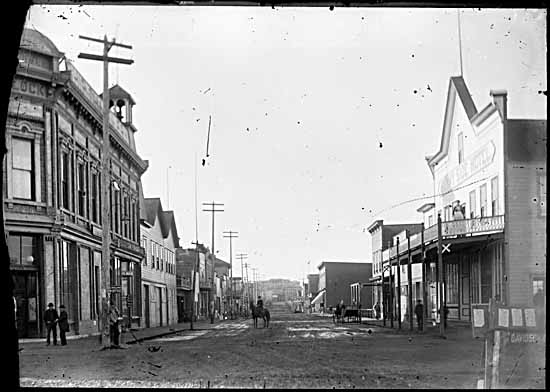 The Byrnes Block (aka the Alhambra): #2 Water Street

The Brynes Block is a two storey, Victorian Italianate commercial brick building developed for Mr. George Brynes who was the Sheriff of Bakerville. Mr. Byrnes purchased a considerable amount of property in what is now Gastown and one of the parcels of land was the site of the burned out Deighton House – which was built and owned by ‘ Gassy’ Jack Deighton before he died in 1875.

The Deighton House was destroyed in the Great Fire of 1886 and was replaced by the Byrnes Block, which was built just after the fire in 1886-87.  The Byrnes Block embodies the sudden influx in investment capital that flowed into Gastown based on the certainty of growth promised by the arrival of the transcontinental railway.

Maple Tree Square is at the irregular intersection of Alexander, Powell, Water and Carrall Streets. It was formerly the town ‘meeting place’. Of the two men standing in the centre of the photo, the man with his back to the camera is Mr. J.M. Spinks. The bearded gentleman he is talking to is Mr. George Byrnes. The statue of Gassy Jack standing on a barrel of whisky is situated nearby the building.

If you’re interested in reading more on Gastown’s history, check out our recent throwback posts: