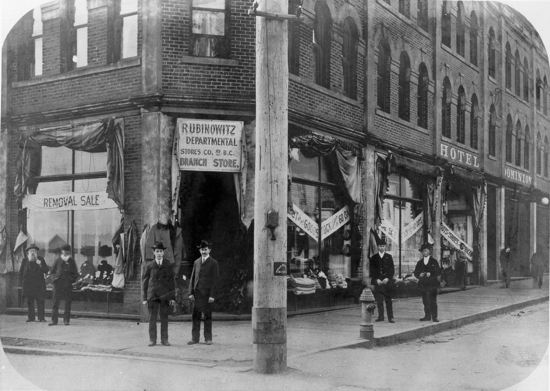 The building that houses these awesome Gastown institutions is known as the Dominion Hotel (which Barber & Co, formerly Dominion Barbers, had honoured with its name).

Originating between 1900 and 1901, the Dominion had a busy department store operating on the ground floor in its early days, owned by a merchant named Swain Sherdahl (the hotel was interchangeably referred to as the Sherdahl Block after him). Its success marks the area’s early prominence as a commercial centre on the Canadian West Coast. The century-long use of the name “Dominion” also solidified Vancouver’s strong economic position as the last stop of the Canadian Pacific Railway.

In 1925, the Lamplighter, which received Vancouver’s first pub license, took over the ground floor. The pub is gained its name from John Clough, who was Vancouver’s one and only lamplighter. In 1887, John used to light the coal oil street lamps of Gastown, but in the same year the city introduced electric lights and John’s nightly patrols became a piece of history.

And did you know… The Lamplighter was the first establishment to serve ladies with ‘intoxicating refreshment’- although they were supposed to be escorted by men!

For a weekly dose of Gastown history, check out our #ThrowbackThursday photos on Instagram.