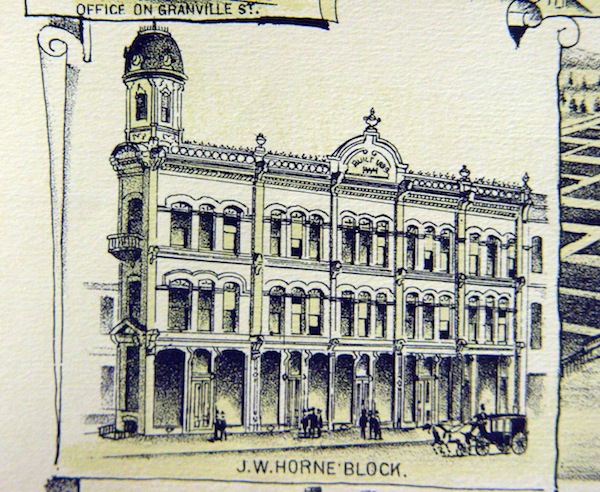 The J.W. Horne Block is one of the earliest brick buildings to be constructed after the Great Fire in 1886, and defined as one of the most significant landmark buildings in Gastown for its triangular form and exuberant design elements. Completed in 1889, this three storey plus, flat-iron, Victorian Italianate residential building is adjacent to the Springer-Van Bramer block. Together, these buildings form a contiguous, triangular unit. The J.W. Horne Block, seen in the background (to the right) behind the Holland Block.

The J.W. Horne block is associated with real estate developer James Welton Horne and designed by Nathaniel Stonestreet Hoffar, one of Vancouver’s first architects. James Welton Horne was known for owning the most land in the neighbourhood than any other single person, second only to the Canadian Pacific Railway.

This landmark building is a often described as “the most exquisite venture into Victorian Italianate style of architecture”, decorated with classical cornice details, turret, and Juliet balcony at the point of the flat-iron building. The Juliet balcony and elaborate cornice details are still here to this day. The Victorian Italianate building is one of the most celebrated early office and retail locations in Vancouver and now the home of Salmagundi West, Uniques, Ric Yuenn, Knit Lovers and Timbertrain Coffee Roasters. The elaborate design and intricate detailing demonstrates the affluence of Gastown’s commercial district during that time.

Salmagundi West will be celebrating the building’s 125th Anniversary this Saturday, January 25 from 11 a.m. to 9 p.m. Come see the Victorian Italianate design elements and join in on the celebration for cake and more surprises! Visit here for more details.