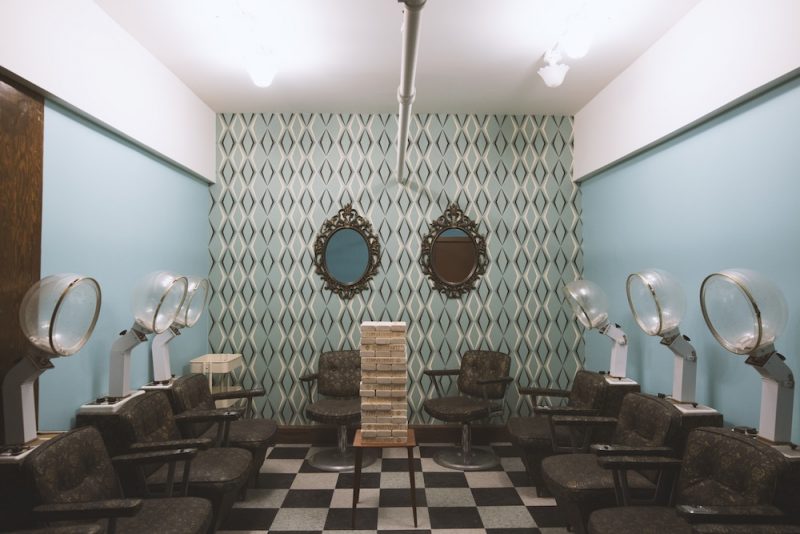 Escape rooms (aka real-life room escape) are the latest craze to hit Metro Vancouver. Their rapid growth in Asia – and now Canada – suggests that they’ll find a permanent place within Vancouver’s gaming culture. The experience simulates interactive problem solving in real time. It’s fun, hands-on and bound to get your heart racing.

Ricard and Civiero were early enthusiasts. After lackluster trials in newly opened rooms in the Lower Mainland, they drafted a master plan to see their own imaginative visions come to life. “It was at that point that we decided we could do it way better than what was out there,” notes Civiero.

ENLISTING THE BEST IN THE FILM INDUSTRY To create a cutting-edge experience, they recruited experts from the film industry to furnish their 3,200 square foot heritage space. Award-winning Prop Master, Ben Krakowsky, and Set Decorator, Heidi Wilkinson, jumped on board to design Hollywood-level décor and effects. “The four of us blue-skied ideas and chose the best ones,” Civiero recalls. “We have another 15 or 20 great room ideas that we’ll introduce in dribs and drabs.”

“The quality of the immersion will be the best in the industry,” says Civiero. “We are the only entry that will have trained actors to create a top shelf experience. Auditions were held to enlist the best talent, who work regularly with an acting coach. “Each group will have an in-character (and costume) host to guide them through the story and make the entire experience immersive and enjoyable,” Civiero notes. “It has taken extensive planning and training, as the actors must be quick on their feet.”

Like a live performance, the team prepares before each booking with a warm-up game to get the blood flowing. Guests can also get their intellectual wheels turning in the waiting lounge, styled like a 1950s salon, and stocked with analog brainteasers and a giant-sized Jenga. In the basement of ‘Thirst for Murder’

SmartyPantz offers five distinct experiences, each accompanied with an inventive backstory that propels the game to new heights. Thanks to film industry experts, room designs stretch beyond imagination, so compellingly realistic, its like you’re being thrown into the silver screen.

We caught a glimpse of ‘Spies and Lies’, set after World War II with 1940s-inspired fixtures and props. While the clock is ticking, gamers must break into the office of a private detective and find information on a wanted war criminal hidden before his return.

Down the hall, ‘Thirst for Murder’ offers chilling thrills in its dungeon, well stocked with jars of detached feet and hands (and an evil serial killer lurking nearby). The team even uses a special effects spray to emulate the scent of dead bodies. We definitely got shivers.

Players can submerge with a crazed lunatic in ‘Doomed Submarine’, revel with skeletons and vengeful phantoms at the haunted house of ‘Tomorrow Never Comes’, or find themselves trapped within an alternate reality in ‘Dreamscape’. With a moniker like SmartyPantz, it’s assumed that puzzles could almost be too challenging, but the pair says the experience is easily modified. “Our puzzles will have much more logic to them,” notes Civiero. “We want people to have fun by having significant number of wins, whether they solve it or not.” And for those who want an extra challenge, they are tinkering with the idea of hosting MENSA nights to crank up the degree of difficulty.

Choosing a location was a no brainer. “Gastown is a very vibrant area and perfect for an entertainment venture like this.” Civiero and Ricard are hoping to draw students and tourists, but also see the venture as an opportunity for corporate team building. In the coming weeks, the team is planning to hit the streets, with actors popping into nearby cafes and shops to spread the word.

So, instead of hitting the theatres, consider stepping right into the action. SmartyPantz is open Sunday to Wednesday, 10am until midnight and Thursday to Saturday 10am until 1am. Book your adventure via telephone at 604-974-9293, or head to their website.