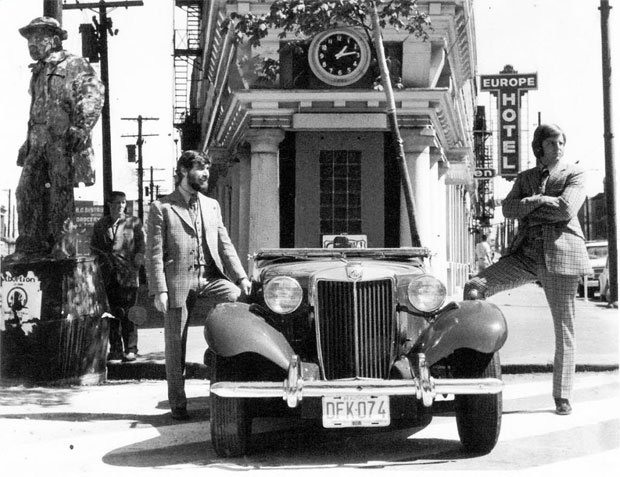 John Fluevog is the epitome of a creative spirit marching to his own beat. For the past 45 years, he’s established himself as a celebrated entrepreneur and shoe designer who intentionally rebels against trends, garnering a cult following of devoted ‘Fluevogers’ all across the globe.

John dove headfirst into the world of footwear in the 1970s working at Sheppard’s Shoes, where he met fellow co-worker, Peter Fox. Within the year, the pair joined forces to launch their own shoe store, Fox & Fluevog, in Gastown at 2 Powell Street (left).

Fox & Fluevog offered shoes that were in a category of their own. John had discovered turn-of-the-century footwear in a Mexican warehouse and reworked them into ‘brand new 50 year old shoes’.

“It was this tiny store that had all these weird, wacky shoes. We were just doing what we felt like doing, and I’m still doing the same thing. The heart and soul is the same,” John recalls.

After a decade-long partnership, Peter Fox and John Fluevog parted amicably in 1981. Fluevog continued to run Fox & Fluevog, taking the business in a new direction. Renaming the company, John Fluevog Shoes, he switched gears and focused on shoe design, developing a signature look that combined outlandish silhouettes with mod detailing, and turning the heads of daring footwear fanatics everywhere.

“At first, I didn’t realize that I could design shoes. The company was like a big art project where I could discover more about myself,” he says. John continued to expand his catalogue of eccentric footwear styles and make waves in the fashion industry. Rocking flannel and Fluevog’s Angel boots became a defining look in the ‘90s, most notably in Seattle’s underground grunge scene.

As a new century dawned, John Fluevog continued to break the mold, this time on the production side of things. Adhering to his mantra “good soles leave small prints,” the company established on-going relationships with small-run factories where a number of shoe families are constructed by hand using century-old methods (as seen here) using eco-friendly materials.

No stranger to experimental marketing, John found a way to tap into his creative cult following and in 2002, created Open Source Footwear, a space for shoe-wearers to share their design ideas. If he liked what he saw, a fledgling Fluevoger might see their creation hit store shelves. Having conquered the world with stores in Australia, Israel and United Kingdom, John returned to the neighbourhood where it all began. In 2008, he opened a flagship store in Gastown, just a block away from the original Fox & Fluevog location. And in keeping with his unusual aesthetic, the flagship space isn’t even a building. The all-glass greenhouse-style structure simply encloses open space between its neighbours. The upper level houses John’s Design Studio and headquarters, giving customers a window (quite literally) into where the latest designs are conceived. The name Fluevog is synonymous with innovation and originality – and colour plays an important role in transforming each shoe into a work of art. John Fluevog Shoes recently introduced a hand-finishing program where Fluevogers can have their footwear hand dyed to almost any colour in the spectrum.

“We did that back in the day. In that sense, it’s getting back to our roots a bit,” he says.

Whether it’s Dr. Martens-style boots or neon-hued platforms, there’s a spectrum of style to sink your feet into. And when you wear a pair of Fluevogs, you’re making a statement.

Stand out from the crowd.