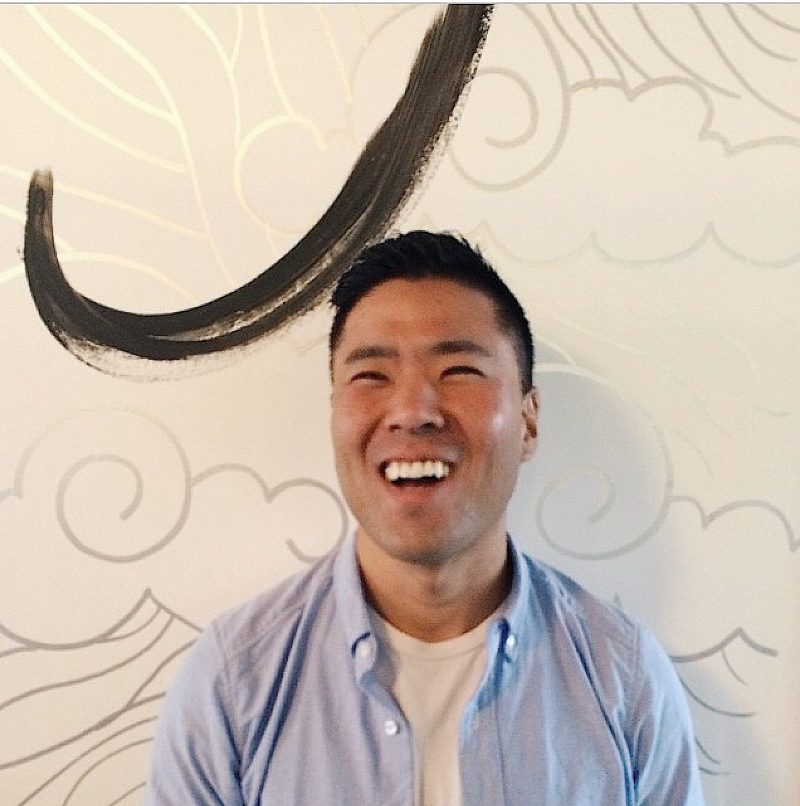 “I’ve been around it all my life,” he recalls, having grown up in his father’s sushi restaurant. “I started when I was thirteen, washing dishes, helping out the family.”

After learning the ins and outs of the restaurant business first hand, Takuya headed for Japan to follow in his father’s footsteps and become a sushi chef. He made his way to Tokyo and Osaka training in all genres of Japanese cooking from sushi to traditional, including Izakaya, a casual dining experience where food and drink go hand-in-hand.

Japan’s strict restaurant industry was a tough nut to crack, which shaped Takuya’s decision to venture into different culinary methods. “When I was growing up, cooking schools weren’t very well respected. You couldn’t simply attend a well-known culinary school and expect land a job easily,” Motohashi notes. “You needed to follow and learn from the chef you’re working under, instead of relying on school to teach you certain things.”

After years of mastering the fine art of Japanese cuisine, Takuya returned to Vancouver as a chef for high-end Japanese restaurants, including Miku and Minami.

Last June, he joined the ranks of Gastown restaurateurs, opening Shirakawa, his first venture with business partner, Keisuku Itoh of the Japanese restaurant company, Itoh Dining. Despite the competitive nature of Vancouver’s restaurant scene – chock-full of new eateries and endless options – he felt welcomed by the Gastown community.

“Gastown is about small boutiques and restaurants wanting a challenge,” he says. “You get to know your neighbours quickly. When we first opened, I didn’t have any high chairs and ran over to Cork + Fin and Coffeebar who gladly lent me a few. The Cork + Fin crew comes by to get beef stock or sake when they want to cook with it. We take care of each other.”

But it’s not only the restaurant industry – Takuya has received support from nearby neighbours, who have become regular patrons. Nancy Bendsten, owner of Inform Interiors is seated a few tables down. “She comes here two to three times a week.” Without hesitation, Takuya identifies Japanese culture as the culinary inspiration. Shirakawa steps into traditional Japanese territory with sharp attention to detail and warm hospitality. The entire kitchen team is from Japan, along with their teppanyaki grill, knives, sake and imported meats.

Similar to a brasserie, Shirakawa’s dining experience is relaxed and unpretentious, shining the spotlight on their exceptional teppanyaki offerings. This concept is a unique addition to Vancouver’s hub of run-of-the-mill sushi joints and Izakaya-style eateries.

“I’ve worked in an Izakaya, but chose to focus on quality food and ingredients,” notes Motohashi. “I didn’t want it to be so high-end, where you feel like it has to be a special occasion to visit. We want people to come here and hang out after work. You don’t have to come in a suit or dress.”

And when it comes to food, Shirakawa keeps it authentic. Everything is done in-house – right down to their soy sauce and mayonnaise. Since its opening, Takuya has revitalized the menu to be more affordable – but still takes pride in using the best ingredients cooked in the cleanest form, in front of you.

Shirakawa’s simplistic approach stands in its own class and is a refreshing departure from the rising popularity of modern fusion cuisine. “We want people to really enjoy the product more than the sauces. Sometimes fusion can be over sauced – and you lose what beef and fish are supposed to taste like. It’s so hard to explain when your palate gets so used to that processed type of flavour. Fancy sauces are fun, but we’re trying to be simple – and good.”

The signature Kuroge Wagyu beef is the talk of the town. Shirakawa is the only Vancouver restaurant offering this indulgent specialty, and steak connoisseurs are flocking to the eatery for a taste.

What makes it so special? It’s significantly different than North American Kobe. Cows are raised in the relaxing Mizayaki Prefecture (South of Japan) and pampered with heavenly portions of fifty-dollar mangoes and rich foods – they even listen to classical music.

The meat is specially flown to Vancouver, where it’s carefully prepared. Its marbling has a unique quality and texture that practically melts in your mouth.

“It’s literally like butter,” he says. “We cook it medium rare just to get the oils moving. It’s served with a hint of sea salt and wasabi pepper sauce on the side of the plate. The two paired together bring out the flavours of the meat. People really love it.” You can also try their signature steak in sushi form. It’s slightly seared and dipped in Japanese a poached egg with sweet soy and truffle. Everything else on the menu is quite inexpensive, so you can splurge on the Kuroge Wagyu without guilt.

If you’re coming for the first time, try the chef’s tasting. “We’ll take you through an intro of the best from our menu that day, or create something based on your preferences,” Motohashi notes. “We love to be challenged and put on the spot.” Alternatively, you can keep it simple ordering many dishes for everyone to taste.

Each visit is a chance to get acquainted with an authentic Japanese experience and try something new. Come with an open mind and prepare to be wowed. Shirakawa is open for lunch during weekdays and dinner every night of the week.