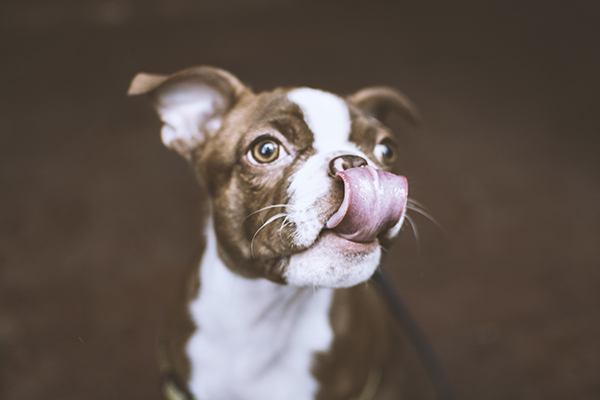 Chive is a Gastown local, spending afternoons on the patio, walking to Portside Park and even stopping by Gaoler’s Mews for impromptu undercover photo shoots, where we caught up with him during yesterday’s chilly rain showers. With treats on his mind, he was quick to share some insight on what’s he’s learned about life in the big city so far.

“As tasty as all of those ‘treats’ on the sidewalk look, don’t eat them – they’re nasty.” It’s good advice from this self-professed beer hound, who has been making the rounds in Vancouver’s burgeoning craft market.

When he’s not hanging out under a chair at Brioche, Bambo, Nelson the Seagull or the Salty Tongue, Chive can be found in his Gastown loft. Taking in the sights and sounds of the neighbourhood through the window, he’s happy to kick back with something to chew on. Fine furniture and clothing often take a hit, much to this parents dismay, but he’ll also chow down on a carrot if the opportunity presents.

And while he may try to fight it, being a puppy means that Chive needs a lot of sleep – conked on the couch with his tongue hanging out. We should all be so lucky…

Weekends are for heading out on the town, where delays are always expected. Chive can’t walk more than a few meters without making new friends, as people stop to give him a pat and tell him how cute he is (like he doesn’t already know). So, things are slow going. But that’s alright, for now.

You can check out Chive’s exploits, including puppy class, archeological beach digs and ET impersonations, on his Instagram account @wickedsmahtchive.

Chive on, little buddy. Chive on.