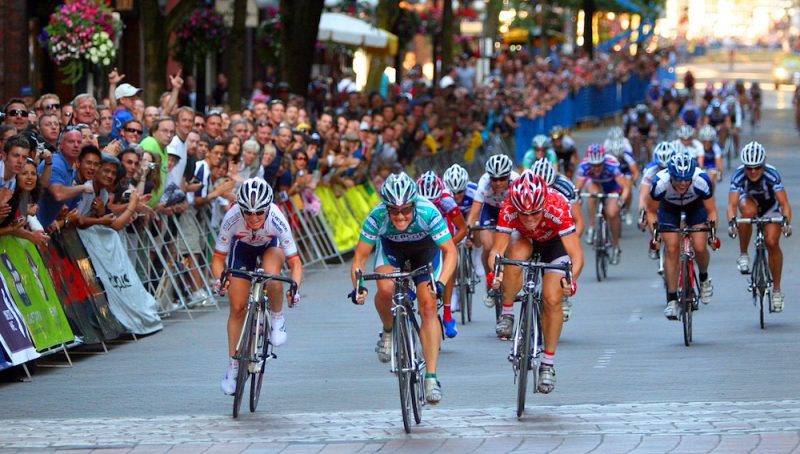 The 2014 Global Relay Gastown Grand Prix women’s race on July 9th will feature more laps, more riders and its largest ever prize purse as it becomes the richest women’s criterium in North America with $25,000 cash and thousands more available in crowd and sponsor primes. The women’s distance will also be increased from 30 to 35 laps (42 km) to reflect the growing calibre of the women’s field, which finished well ahead of schedule last year.

The increase in prize money and move to gender equalization for prizing was led by title sponsor Global Relay, a Gastown cloud-based technology company.

“As a businesswoman running a technology company, I am very proud Global Relay is offering North America’s largest women’s criterium prize purse at this year’s Global Relay Gastown Grand Prix,” said Shannon Rogers, General Counsel of Global Relay. “Whether their career is in technology, business or cycling, successful women all share a strong spirit, drive and work ethic. At Global Relay, we are committed to promoting these qualities among our staff and in the broader community and to helping women in all fields follow their dreams and achieve their goals.”

Cycling Canada President John Tolkamp applauded Global Relay’s move saying, “We are very pleased to see the Global Relay Gastown Grand Prix continue to recognize and support women’s cycling. We commend the organizers for bringing parity to the prize list and I am personally looking forward to an even more exciting and stronger event in 2014!”

Global Relay’s efforts were also supported by former pro Gina Grain, who shares the record of three Gastown victories with Verna Buhler: “It’s wonderful that the sponsors are recognizing women’s talent and are supportive of it. Equality has been and still is a long time coming in women’s cycling and it’s nice to see it moving forward. Women train just as hard as the men, why shouldn’t the prize money be equal?”

Global Relay provides additional support for women’s cycling through its Bridge-the-Gap fund. The program addresses the gap that exists in the development of Canadian cyclists between the ages of 19 to 25, by helping provide access to the coaching, resources and equipment cyclists need to reach their full potential.

In addition to this announcement, the Gastown Grand Prix has joined the 2014 USA CRITS Championship Series and is expected to attract one of the most talented men’s and women’s fields. With top tier cycling talent, this year’s race is set to be the most exciting one yet! Be sure to come down to the neighbourhood on Wednesday, July 9th to catch all the nail-biting cycling action in person!