Gastown on the Silver Screen – Gastown 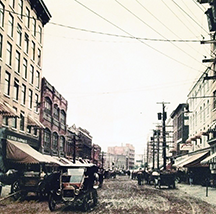 The neighbourhood stood in as San Francisco’s North Beach Arts District in Tim Burton’s latest film, which was shot in the summer of 2013, and it’s just one of a long list of productions that have made a stop in Gastown.

In 1984, The Neverending Story used the corner of Water Street and Cambie for the opening and closing scenes. Ten years later, the crew working on Brad Pitt’s epic American drama, Legends of the Fall, transformed Alexander Street into Helena, Montana during prohibition. Storefronts, banners and even the street were made over with red, white, blue and a whole lot of dirt.

Since then, the area’s architecture has provided the perfect backdrop for a number of diverse television series, including Supernatural, Psych, Falling Skies, Once Upon a time, Motive, Arrow and The Flash. But with the release of Big Eyes, Gastown is once again hitting the silver screen. Of course, this wasn’t the only high-profile feature to visit Gastown in 2013. Fifty Shades of Grey opens in February, having wrapped filming around the same time last year. Jamie Dornan and Dakota Johnson filmed several scenes in the neighbourhood as Gastown doubled for both Portland and Seattle. Whether it was a rainy morning jog down Alexander Street or an elaborate night shoot on Powell, the crew had to work hard to keep the film’s secrets under wraps. Rainier Provisions served as an interior location for the production, while the exterior of KimPrints created a backdrop for Dornan. Even Maple Tree Square will be on display, serving as the setting for one of the films pivotal stunts.

With the volume of productions on the rise, we’re sure to see more crews on Gastown’s streets in 2015. Productions already announced for BC include the film adaptation of TV western, Big Valley, and the Cameron Crowe / JJ Abrams pilot, Roadies.