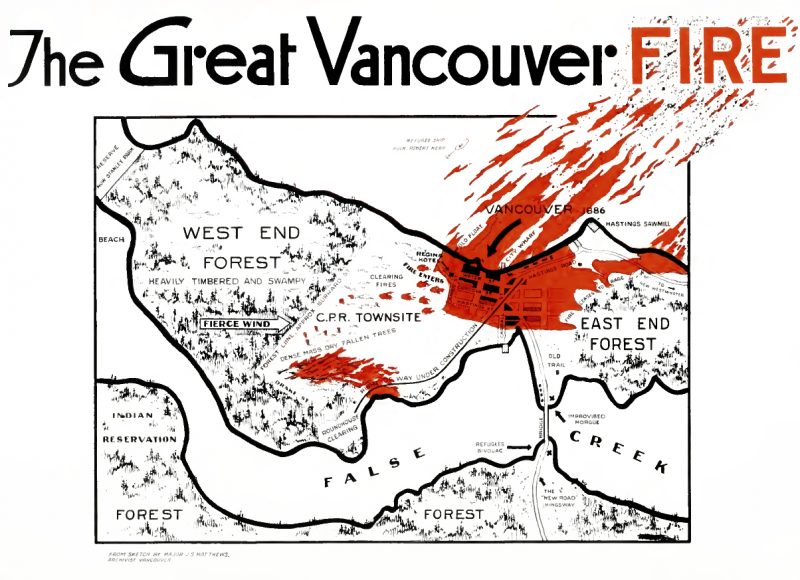 It was June 13th, 1886, a Sunday.  A small crew of Canadian Pacific Railway men worked tirelessly, clearing fires set the day before.  With little warning, a sudden wind hit hard and the fire got away from the men. The death toll was uncertain. A figure as high as 28 has been cited, but an informal inquest held the next day noted only eight confirmed deaths. Many dead could have been burned without a trace and the nature of the town was such that there were many transients whose names would not have been known.

Someone who saw the ominous rising clouds of smoke began furiously ringing the bell of St. James’ Church at Powell and Westminster Road (what is now Main Street).  For many, that was the first sign  of fire.  Then came the alarmed shouts of men, running ahead of the flames to escape and warn the town.  But the fire overtook them, leaping from treetop to treetop and descended with a roar on the defenceless little town. The southeast corner of Cordova and Carrall the morning after the fire. The Regina Hotel at Cambie and Water is in the distance, and the smaller white tent in the upper left is about where Woodward’s is today.

Men dropped before their companions’ eyes and were consumed in the fire.  The heat was so ferocious the bell of St. James church which had warned so many, turned into molten slag when the church in its turn burst into flame.  (The melted bell can be seen today at the Vancouver Museum). Three weeks after the fire.

Help from the surrounding towns proved swift and generous. In Vancouver, Milltown to Metropolis Alan Morley writes:  “Doctors and women collected medical supplies and bandages, food, clothing and household goods were donated, and by 6 o’clock in the evening an unending relief caravan was making its way to Vancouver. Five weeks after the fire.

By 3 o’clock in the morning, lumber wagons were jolting in from the Fraser communities; nails and tools were unloaded by the light of lanterns and the flickering of still-burning stumps.  By daylight, tents and building frames stood in the dawn, with the smoke curling around them and the ashes puffing wherever a man trod.  “In 20 minutes, Vancouver had been wiped off the earth.  In 12 hours, it was rising again. Improvised city Hall (tent) at the foot of Carrall Street – City Council at meeting after the fire. Vancouver Fire Brigade, No.1 Fire Hall 1895 – South side of Water Street, about 66 feet from Carrall Street.