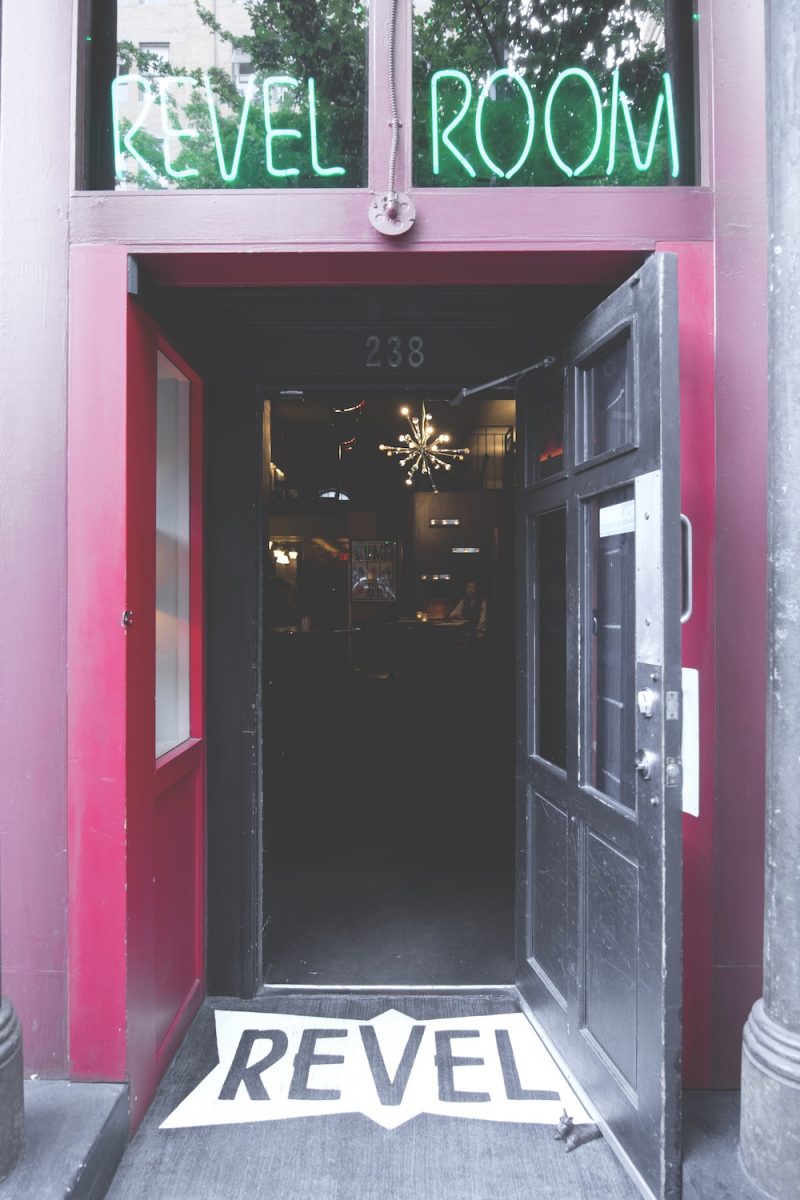 Since its debut, Revel Room has established itself as both a restaurant and a respected venue for live music thanks to its rock ‘n’ roll owner, Dennis Brock. Getting his start in the music industry back in the mid-80s, Dennis traded a career as a professional musician in the crowded and competitive San Francisco scene for restaurant ownership in Vancouver. In 1996, Dennis opened his first burrito shop in the city after noticing a lack of Mexican fare and five locations later, sold the business to launch Revel Room.

“Revel Room is an extension of my own living room. I wanted to created something unpretentious, yet unique,” he explains.

The initial launch wasn’t a walk in the park. Revel Room opened its doors in 2008 on the same day that news broadcasts reported the start of a recession. “I remember coming home and it was the first thing I saw on the television,” he recalls. But, despite a rough beginning, Dennis was hopeful he could make a go of it in Gastown’s budding community.

“Gastown’s got the old bones. It was tough back then, but that’s also why I wanted to be here. The community was developing and I could see it all coming into fruition quickly,” he says. “This room has definitely seen some action.”

Today, Revel Room has become a favourite hangout for locals who want to soak up some good old-fashioned entertainment. The lineup features some of the city’s most established cats, most of whom Dennis met while organizing the Gastown Blues & Chili Festival five years ago. “It takes a while to build up a community and let people know where to go to find live music, but we’re really starting to see it manifest into what we thought it could be,” he explains “People from 20 to 80 years old are coming here to enjoy the live music.”

Resident music vets swing by four nights week for a rotating schedule of the city’s best. The boogie-woogie piano man, aka Mike Van Eyes, plays during Revel’s sour hours Tuesday through Saturday, 4-6pm, and returns for piano dueling nights with Doug Ross on Thursday nights. On Tuesdays, Maple Blues Award Winner, Steve Kozak, brings his shivering West Coast Blues, and on Sundays, The Do-Rites take over with country singer, Kelly Haig. And, for those who need to cure a case of the Mondays, Revel hosts comedy nights on the first Monday of every month.

“We continue to meet more musicians through these great players. There have been nights when new musicians spontaneously get up on the stage and perform.”

On Wednesday nights, Dennis rekindles his rock ‘n’ roll roots showcasing his vocal chops with house band, The Revel Review. The band is a culmination of legendary players who rock out to ‘40s western swing and Texas jump blues. Revel Review has become a hot commodity, performing various gigs including a live stint for Make Music Vancouver fest last year, which drew a crowd of excited onlookers who danced up a storm on the street.

The music program is certainly gaining momentum – and they are already in talks for a potential unplugged series with radio host, Todd Hancock. “We’re pretty steadfast in wanting to keep it going and people are starting to talk about Revel Room as an entertainment venue, as much as a great cocktail bar and restaurant,” notes Dennis. Just like the music, Revel’s menu offers a nod to the South with tapa-style dishes – like St. Louis ribs and spicy pork grillades – that pay homage to cuisine from New Mexico and New Orleans.

Revel’s spirit-forward cocktail program is also a hit. “We probably sell more bourbon sours than any other restaurant in the city.” Ask the fellas behind the bar to mix something original, or play your hand at their Negroni roulette. Two dollars from every Negroni drink sale goes towards the Battered Women’s Support Services.

“I’ve been down here for seven years and you really get to know people. I’m always happy to contribute any way I can,” Dennis explains.

“You don’t get into this business for the money. You get into it for the friendships and to leave your mark on the city. I hope Revel Room will be here for another 50 years.”