Two Wheel Gear: From the Bike to the Boardroom – Gastown 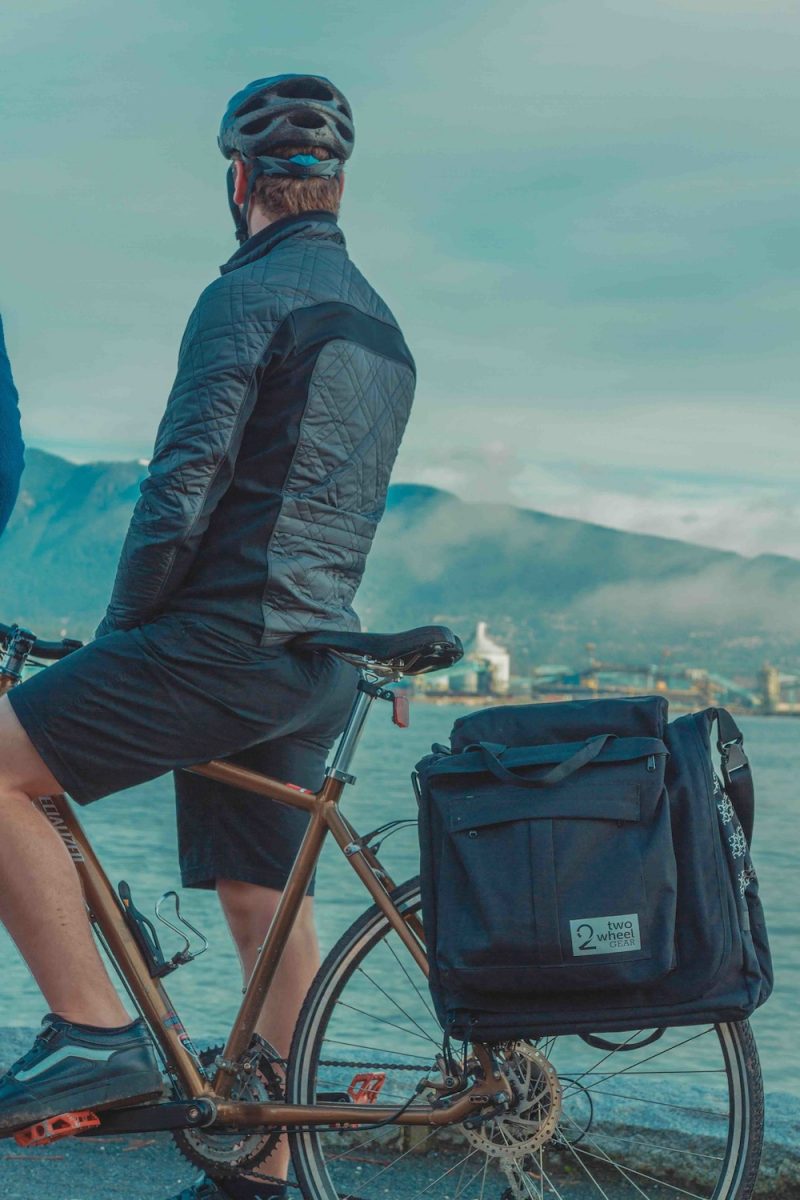 Keeping work attire looking crisp and wrinkle free was a struggle for Craig Coulombe. After many frustrating rides, he borrowed his mother-in-law’s sewing machine and created his own modern carrier – The Classic Suit Bag.

Craig’s prototype was the first garment bag to keep clothes perfectly pressed and could be easily fastened to a bike rack. He enlisted the help of friend Ken MacLean to launch Two Wheel Gear in Calgary, and they quickly developed an underground following around the world.

With aims to take their product to the next level, Craig & Ken approached Reid Hemsing (then, a university student) who spent his spare time building bags in his basement.

“I spent all my evenings and weekends working on the venture as a side hobby,” Reid recalls. “I hacked things apart and hand rivet everything together to form prototypes I could toss around.”

It was a joint effort to produce the new and improved commuter bag. Reid managed to iron out the kinks, testing each new version on his morning commute, while local developers polished his prototypes into a viable end product.

“Function was always at the forefront – but it was important to design a classy aesthetic, so any professional can take it to the office, unlike the sporty Velcro bag that’s typically on the market.”

After successfully managing design and production, Reid joined the company ranks full-time and eventually took over the business in 2012. His first move as president was taking Two Wheel Gear to the West Coast. “Vancouver is the best place to launch a bicycle-based business. It’s truly the epicenter of cycling and is years head of most cities in terms of cycling infrastructure.”

Last September, Two Wheel Gear became a member of Gastown’s growing business community after setting up its corporate operations in the historic Mercantile building.  “It was always in our plan to work in a modest office in Gastown. The neighbourhood is home to an awesome start-up business community,” he explains.

Two Wheel Gear quickly gained momentum. Solid e-commerce sales paved the way for the company’s success in the niche commuter market – and within months, they went maintstream. Mountain Equipment Co-op – Canada’s largest retailer of outdoor and cycling products – came on board as a major customer and is already stocking their product line on store shelves nationwide.

“Sales are off to a great start. It’s definitely a new and exciting step for us.”

“There are a lot of established players in the messenger bag market,” Reid notes. “We want to continue creating the best bags for working professionals and are expanding our line with classy commuter styles.” Expanding on ‘The Classic’ suit bag style, the team developed a 2.0 version loaded with new features including a pocket to secure a laptop and daily accessories.

They also worked with a Vancouver-based textile distributor to gain access to British Millerain’s high-tech waxed cotton used in “The Heath” messenger bag.

“We’re trying to grow our products beyond Canada to become a global brand – but developing a local approach is very important.”

Among the list of local collaborations, Two Wheel Gear has partnered with local craftsman, Colin Mayhew, to design a line of leather accessories such as a beer growler holster and a yoga strap carrier. They’re also in the early stages of developing graphic laser-print bags with Dynamo Studios.

Reid’s newest design is bound to be a game changer. Currently in stage two of the prototype phase – it’s a convertible bag that goes from pannier to daypack that should be released next year. The company’s ability to marry style and function is what makes their designs appeal to both the corporate and everyday commuter. “We don’t make the cheapest merchandise out there, but our products will last a long time and function beautifully.”

“Our focus is straightforward and simple. We make it easy to ride bikes and look like a boss when you get there.”