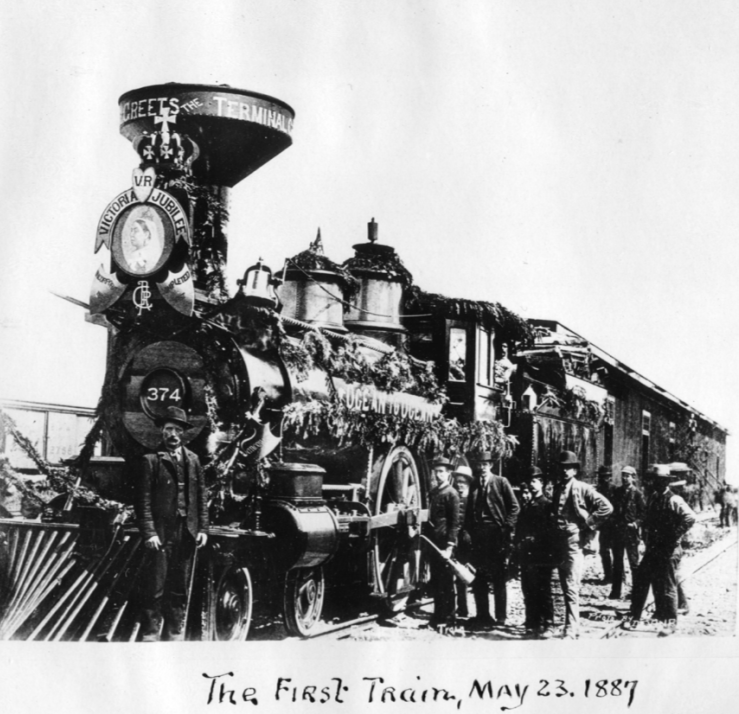 If she were alive today and in Vancouver, she would probably celebrate here in Gastown. Our neighbourhood is rich in history, culture and community. Even now, that spirit still exists, fully alive and well. The first CPR train pulled into Gastown on May 23, 1887 – exactly 129 years ago to the day. The passenger train arrived to Gastown from Montreal. Locomotive 374, attached to the train at Port Moody, brought it in with Peter Righter at the throttle. Vancouver was chosen by the CPR as the Pacific terminus, guaranteeing the town’s dominant role in southwestern B.C. Initially, the tracks were built over top of the tidal flats and soon were moved up to a wharf at the bottom of Granville. A larger station opened in 1898, which was then replaced by Waterfront Station in 1914.

Imagine Gastown in 1887 – The year after the Great Fire; rebuilding and renewal, prospering and growing. Great sailing ships at port, loading logs and timber while rough, sea-weathered crewmen unload fine teas, silks, and other desirable imports from the British Empire. Rough-and-tumble off-work loggers, fishermen, crews and captains find release from the burden of a hard life in 100’s of licensed local drinking establishments. The dock is shared with ferries from North and West Vancouver and the Union Steamships, carrying adventurous passengers to disembark into the beating heart of Gastown. Hudson Bay’s first store is now open on Cordova Street; a lease taken on CPR property. “Shelves held what were advertised as the “necessities of life,” saws, axes, lanterns and provisions”, vital tools for the workingman and hopeful gold prospector. (source: vancouverhistory.ca/chronology2.html) Gastown is thriving as the hub of the city’s wholesale produce distribution with warehouses, provision stores, department stores and food retailers – Hudson’s Bay Company warehouse, Woodward’s, Fairbanks Morse, Army and Navy stores, Malkins and Kelly Douglas; all are prospering. Highs and lows will visit the historic neighborhood in the coming years though Gastown will survive and grow through it all.

Victoria Day has been celebrated in our country since at least 1845. On May 23rd, Gastown will be alive as always, abundant with music, good food, fine beer and great company. Where better to celebrate Victoria’s birthday and the day Train 374 puffed and chugged it’s way to rest in Vancouver, than Gastown. Long may the tradition continue!