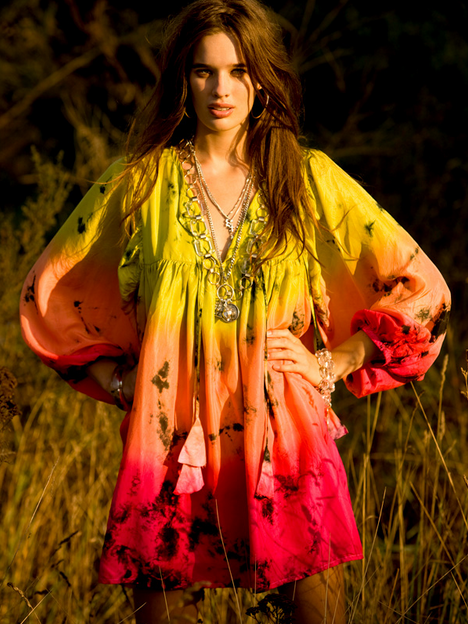 Born and raised in Czechoslovakia, Anna grew up in a structured environment that didn’t exactly encourage creative endeavors. Instead of pursuing her affinity for fashion, Anna worked towards a master in mechanical engineering, specializing in textile technology, but a serious case of wanderlust took her off that path. “I wanted to see what was out there and decided to move to the furthest spot on the planet from Czechoslovakia,” Anna recalls.

Entrepreneurial inclinations took her to Vancouver, where she began to toy with the idea of pursuing a career in the fashion world. After contemplating whether or not she could “make it”, Anna dove in headfirst and launched her own independent swimwear label.

“I never really saw myself making clothes in the corporate world. I don’t feel like I have anything to say there,” she notes.

It’s been almost 15 years since she moved to Gastown, and she still recalls being one of the only businesses on the block. From her loft studio, Anna built her business from the ground up, testing the waters with a small collection and gradually gained the confidence to develop a full fashion line.

“I didn’t think I could make a living out of design because I don’t have any academic training – but I’ve been immersed in fashion all my life,” says Anna, who spent a majority of her childhood experimenting with the fabrics. As a self-made designer, Anna clearly has talent including an “eye for style”. Even the most educated designers rely on their instincts – an inherent ability that cannot be taught.

She doesn’t exactly design for a specific demographic, “I have all kinds of customers from 14 to 80 year olds. My customer doesn’t fall into a certain age group, but a distinct mindset.” Anna’s designs cover a broad spectrum of looks suited to the modern bohemian who strives to feel liberated in what she wears.

The collection is a mix of sexy swimwear and resort fashion, from silk tie-dye cover-ups to elaborate monokinis. She designs everything in her Gastown studio, and works with a family of crochet artisans who bring technical specs to fruition with careful handwork. Developing original stitches can take up to two years, and new styles debut once a year. The Anna Kosturova brand has seen major success in the U.S. market. You can find her designs in topline retailers like Saks Fifth Avenue and Net-A-Porter, and also in the pages of Vogue and InStyle. Sports Illustrated has been featuring her designs every year since 2006. Her name also has a strong presence in Miami Swim Fashion Week, and she plans on adding new conventions in New York and Las Vegas to her trade show roster.

“When you’re with all the top brands, it’s a good boost. Aligning with the right people is key to getting your designs recognized,” she notes. “We’ve done a good amount of public relations work ourselves. In the early days we didn’t have social media. It’s a different market compared to two years ago. I feel like I’m starting again because the landscape has changed.“

As an entrepreneur who has created her own unique space within the industry, Anna is quick to offer advice for aspiring fashion designers navigating social platforms, “Lots of lines appear on Instagram, but as the saying goes ‘to be famous on Instagram is like being rich in monopoly’. You have to define yourself using other marketing avenues to sustain long-term success.”

In her opinion, it’s also important to be versatile and ready to adapt to the fashion industry’s natural fluctuations. Expanding on the brand’s lifestyle concept, Anna is breaking into ready to wear with a new, relaxed look inspired by the West Coast.

“I view design as a purely chameleon venture.”

The latest collection can be viewed at her studio & showroom by appointment.