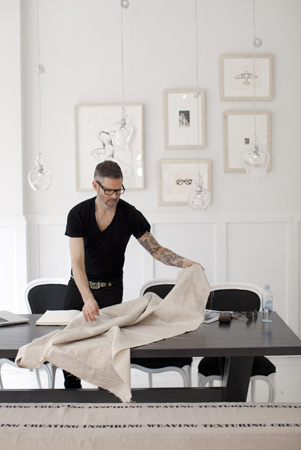 That aesthetic was exactly what Wilds hoped for when he peeled the paper off the glass almost three years ago.

“In Paris or in London, it’s not unusual for a designer to have a showroom or a little atelier of some kind that is an inviting space and also speaks to the work.”

The interior of the 729-square-foot Gastown studio was inspired by a trip that Wilds took to Amsterdam over a decade ago. With an appreciation for Dutch design, he explored the city on foot and quickly discovered some unexpected views.

“No one closes their window treatments, you can walk these canal streets and look right into people’s lives,” Wilds recalled. “You can see how they live, the materials and the shapes they put together – I loved it and it has always stayed with me.”

Aware that Vancouver condo towers can’t offer the same experience, Wilds brought the concept to life in Gastown. The space has occasionally been mistaken for an apartment, something that has been effective in giving potential clients an immersive look at Wilds innate aesthetics.

“I think we’re a culture that lives in pictures, people don’t read anymore,” Wilds explained. “We want to see it, we want a story in front of us and then if it sparks any kind of greater curiosity, we’ll engage further.”

Wilds, who previously served as the in-house designer at The Cross, is well known for mixing elements to create rooms that are both beautiful and balanced. He has a talent for seamlessly integrating investment and affordable elements to produce an interesting and multi-layered environment.

Where there are modern details, Wilds counters with a vintage piece, and where there is elegance, there is also edge.

“The idea that I have this really beautiful space and I put an object or image that is antithetical to that, makes it more appealing to me,” he added. Given free reign, Wilds gravitates towards neutrals. He taps the use of white as the bravest choice of all, but recognizes that many clients want at least a little colour.

“When you have white as a backdrop, you can infuse colour in very controlled ways,” explained Wilds. “It can be used to draw the eye around the room.”

Wilds also recommends being cost-efficient with colour. Anchor pieces, often the big-ticket items like a sofa, should be in a neutral palette, while colour manifests itself in artwork and accessories that can be replaced as tastes change over the years.

Every new project begins with a site visit, where Wilds can see the architecture of the space, get a sense of the client’s wishes and determine the budget. It’s a chance for him to go through a list of ‘what if’s’ and decide where investment should be made and where deals might be possible.

“You can get a great t-shirt at H&M for $15, but if you’re going to spend more money on a fantastic cashmere sweater, that’s got to have some staying power,” Wilds stated. “The same thing goes for our homes – it’s buy well, buy once.” Design elements need to stand up, both experientially and against wear and tear – unless that’s going to be part of the patina of a piece. In some cases, wear will add character, while in others it’s a case of understanding the realities of how materials will work in a home.

“If someone wants to do marble because they sat at a bar in Paris, I want to do it, but I have to tell them that it’s going to chip and it’s going to stain,” he explained. “That bar might have been there since 1910 and they didn’t see the wear because they weren’t looking for it.”

Wilds wants a room to appear as though it has been assembled over time, even if that means asking a client to hold out a bit longer for the right vintage or industrial find. And sometimes, there are discoveries just waiting for the right space.

“I have this arsenal of things I’ve seen, whether it’s tile or fabric or a type of millwork or the shape of a piece of furniture, it’s like I bank it in my head and go – love it,” stated Wilds. “And then a year later I’ll walk into a space and boom, I know it will look amazing there.” So, what’s with the skulls? Well, for Wilds they are one of several emblems that repeat throughout his work. Antlers, owls and the shape of the heart (both romantic and anatomical) are often stamped somewhere within a design. When it comes to the skull, it’s a combination of artistic appreciation for the form and reverence for what it means to us as humans.

“I think culturally, we are terrified of death and it’s one of those things that we perpetually push away, like it’s never going to happen,” explained Wilds. “I’ve always felt that the healthier our relationship is with it, the better we live.”

This also speaks to the personal connection that Wilds makes with his clients, recognizing the intimacy of his position and how design touches people’s lives, a sentiment that is at the core of his business.

“I’ve watched marriages end, people living, people dying, and there I am being welcomed into someone’s world,” noted Wilds. “Whatever we are going through in our life happens in our homes. Everything. And I’m there, right at the front line.”