The Art of Custom Framemaking – Gastown 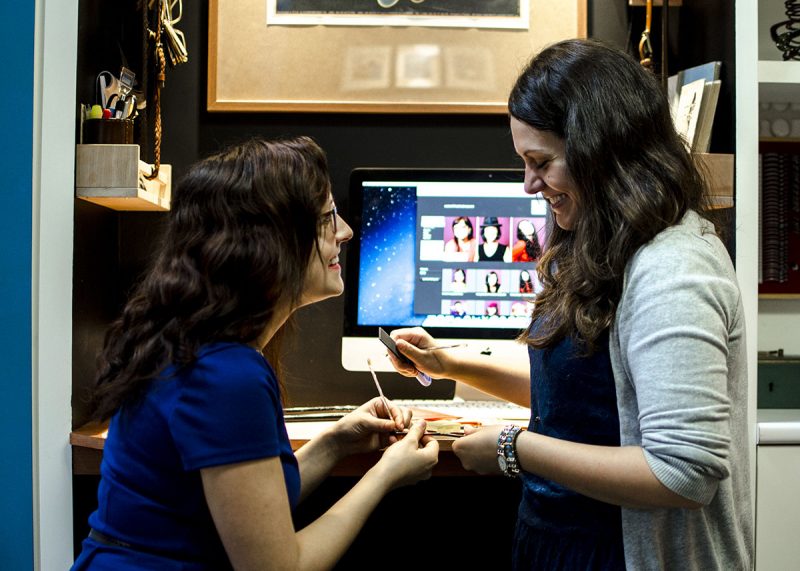 “I met Klaus and the rest is history,” explained Sara. “He came to do a seminar on soldering and I was so inspired by his passion for what he does that I actually turned to my friend and said I’m going to own that guy’s business one day.”

Klaus was the creative mind behind Eyeland Framemakers. After running an avant-garde luxury boutique, he decided to start a new concept optical store on Granville Island in 1994, known then as Granville Eyeland. Upon graduation, Sara approached Klaus and worked alongside him as an optician, eventually taking over his business in 2008.

During these years, Sara realized they were outgrowing their small space on Granville Island and saw an opportunity to combine the retail and studio space into one location in Gastown.

“It’s a much larger space, allowing me to expand on the tradition of designing and hand making my own eyewear,” Sara notes. “I love Gastown. This is where my friends and I shop and hang out. It’s got so much character, is filled with fashionable people, and there are many studios and makers ­– it made sense for us to be here.”

When you step into Eyeland, you’ll notice walls of eye-catching frames made with some of the most unique materials including mammoth ivory, buffalo horn, sundrenched wood, and husk from a palm tree in English Bay. But it’s Sara’s line, Mosh Designs that steals the show. As one of two female framemakers in the world, the other in Paris, many are coming to Sara specifically for her innovations and sharp attention to detail. “One of my clients’ sons is autistic and also an amazing artist. His work was recently featured on a set of stamps for the United Nations. I took a piece of his art, had a friend silkscreen it and then laminated the silk in-between clear pieces of acetate and crafted a pair of eyewear for her with her son’s art in it,” Sara explains. “The end result was an outrageous pair of frames – just what she was looking for.”

Fusing unconventional materials is Sara’s forte. In previous projects, she has crafted frames using lace from a wedding dress – and even real human hair.

It’s the passion and dedication that has kept the spirit of handcrafted work, often coined as a ‘lost art’, alive and in demand. Sara has noticed a growing resurgence in crafted goods, stemming from the desire to stand out in a crowd.

“Eyewear has become fashionable – it’s one of the most important accessories we wear, since it’s the first thing someone notices,” notes Sara. “We see the value of having multiple pairs, like shoes, and people that shop here love wearing eyewear that’s different from their peers.”

Since originality plays a big role at Eyeland, new designs and collaborations are constantly in the works. Sara is currently creating a series of leather-lined frames and accessories with Denise Wilson of Bronsino, Canadian leather goods makers. Novus TV host, Natalie Langston is also working with Sara to design her own pair of signature eyewear. Designing your own pair is a fun process and makes for a memorable story to share with your friends. A custom frame starts at $530 ­– in line with any high-end frame, and you’ll have something special that was locally made with skill and love. No one else in the world will have the same pair. Pop by for a visit and check out Eyeland’s selection of topline European eyewear as well as Sara’s custom framework at 45 Water Street.