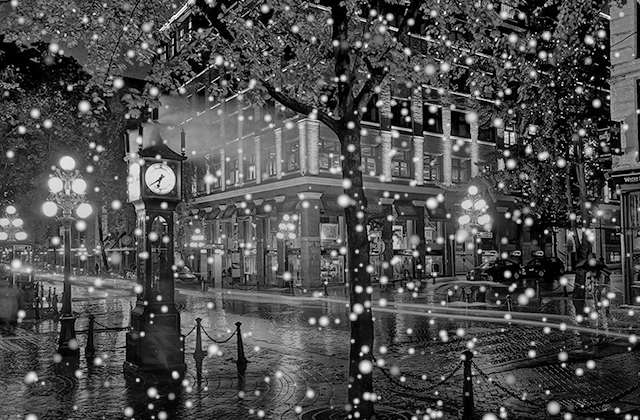 It’s a bit like being a remora on the belly of a shark. The shark cruises along doing its thing, and you tag along for the ride, providing a valuable service in a symbiotic relationship. We’re absolutely a team, but I’ve got a certain level of self-sufficiency.

I have a lot of ideas on how to shake things up here on the blog, and I’ve been grateful to get so much support thus far, but what I certainly didn’t expect was to be dropped into the whirlwind of moving parts that has been the organization of Yule Duel.

Yule Duel is a Christmas carolling competition that pits 20 different choirs against one another on the streets of Gastown and it’s been, no joke, nearly a year in the making.

I was little shell-shocked when I found that out. If nothing else, I almost couldn’t believe the sheer level of dedication, passion and determination that it’s taken to bring this event to life.

It might not be a big deal to hold a street festival if you’re a team of dozens, but we’re not. It’s been a small handful of people putting this event together.

And I haven’t really been much of a cog in that machine, more like a spectator. All I really did was chase down a few choirs, do some interviews, get to know them as people, chat about music, have some laughs and whip up some articles. Not exactly a day in the coal mines.

But if you’ve ever been behind the scenes on any project or organized any large-scale event, you know that it’s not easy, it’s not always (or for that matter, sometimes ever) fun. There are disagreements, compromises, unexpected obstacles, tough choices, minutia, headaches, early mornings, late nights and stress. Lots and lots of stress.

That’s what I’ve been witnessing over the past month, and I’ve had to wonder, what keeps these people going? Why do they do it? Why in the hell are they going through all the trouble of putting on the Yule Duel?

While not officially part of the neighbourhood, we also have to thank IATSE Local 891 and Warner Bros., who spend a great deal of time here and who support this community as if it were the real Starling City.

Also we have to give a big a shout out to the choirs from Guilt & Co. and The Portside Pub, who are not only sponsoring the event, but are willing to bring their talents to the streets to compete head-to-head with all of the other choirs.

They’ve all helped us bring this event to life, because they believe in the talent and the cause as much as we do.

So come to Gastown on December 3rd, check out some amazing talent and entertainers, get into the holiday spirit and help all of us give something back.